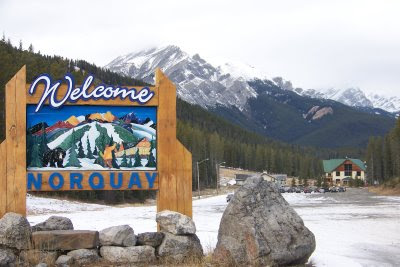 It’s 10:41 a.m. at Banff Mount Norquay. I’m settled into a comfortable spot on the only available sofa, grateful for the warmth of the laptop computer on my legs. Relaxing guitar instrumentals by Brian Thiessen are my iTunes choice. I look at the briefcase of papers and books I’ve brought along to occupy myself productively while my son skis opening day on the mountain. I choose instead to organize my music into more specific playlists. 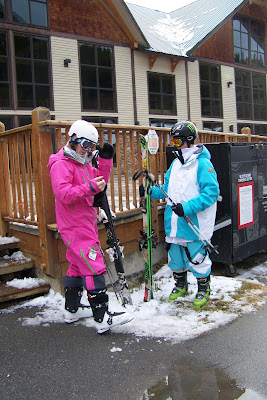 Getting on the gear
Andrew and Chris have dreamed about this day since Sunshine’s closing day in late May. The upbeat song “Winter’s End” playing on iTunes right now would not reflect my son’s musical feeling about the event. His season-end selection would play more like a dirge. They extended their snow time by attending Momentum, a glacier-based freestyle ski camp at Whistler, BC which ran into early July. After a brief necessary interlude filled with aggressive mountain biking, they returned to training August through October on freestyle water ramps in Calgary and Red Deer. Andrew broke bindings and split skis, broke his concentration on Chemistry and broke in new boots. And they watched ski movies, day in, day out, all year long.
Last weekend they skied urban rails and Chris’ backyard with the assistance of snow from the hockey arena and a launch ramp Chris built. It’s 6 feet high, has a ladder up to a flat platform where they snap on skis and tip onto the down ramp coated with Astroturf. It folds up to fit into an SUV or van for transport. It receives the deserved adulation from the skiers: “Epic. Legendary. Sick.”
Five years ago (or less), if I had seen guys doing what these boys do on public property, I would have stopped and given them a scolding (to my current shame). Now that I witness the effort, dedication and ingenuity, I proudly post videos of their escapades on my Facebook page.
At times, the generational differences are staggering. My son is now a current expert on proper driving techniques, an authority on bad parenting, a connoisseur of reggae, black metal, rap and dance hall compositions – most of which are physiologically abusive to my nerve endings. But we still connect. Sometimes with static, other times with satisfying energy. 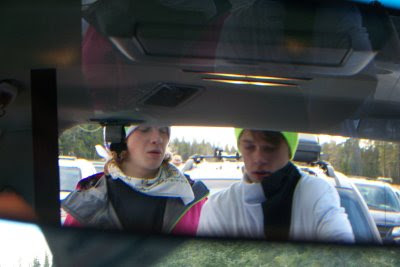 Chris and Andrew in the rear view mirror
He comes in for lunch, ecstatic.
“We might be in the newspaper! There was a photographer who asked us right before we came in for lunch. Chris and I ‘trained’ right behind each other on the rails. It’s gonna be such a sick picture.”
“Did he get your names?” I asked, a little dubious.
“Yeah. He said he’d aim for tomorrow but it might not be in until Thursday.”  See actual article online here.
That’s the way it is when you live in a city of one million people one hour from the mountains. The first day of ski season truly is Big News. If my son and his friends are any measure, half the households in Calgary are digging for their gear sometime during this four-day weekend.
And now I have to dig for my writing assignments, focus my own concentration on critiquing non-fiction articles and breaking in my thesaurus. My opening season into writing and publishing has begun. No one took photographs. I schuss alone across mountains of words, jump off paragraphs, teeter at the margins, ride the lift of line breaks and carve new tracks in fresh powder parchment.
Epic.