The Air Is Yours: Use It! 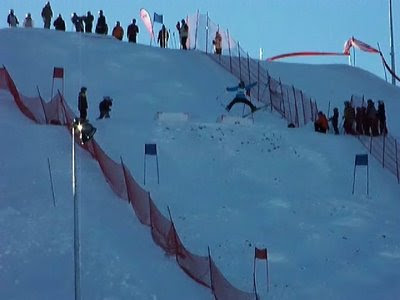 My son, the freestyle skier, was in a Provincial Competition at Canada Olympic Park this weekend with his ski team. Friday night, in Slopestyle, they have a long run down the mountain with three big air jumps - they can do whatever aerial tricks they choose. He placed 7th in his age group. Then Saturday the Mogul competition involves a very steep, long mogul run with two small jumps. He was in great pain - shins and calves have been overtaxed - but he competed bravely. His first run was fine and his second run was good until after the second jump - caught an edge and one ski popped off.

Overall, he enjoyed competing and being with his friends in the club. Sunday after church and lunch, he studies for his Chem 20 exam with a friend. I was grateful I could spend the day outdoors in mild temperatures, soak up some sun and cheer him on. This is what the park looked like as we were leaving. 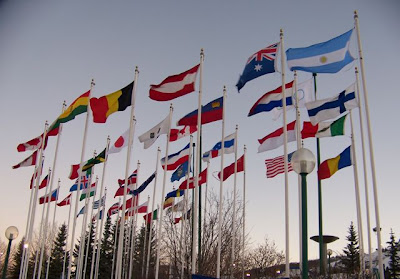 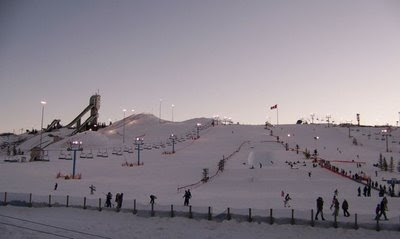 As I watched A skiing slopestyle competition Friday night and the steep moguls Saturday at COP, it seems like only yesterday he was building snow forts in the back yard. My friend commented that life just changes. “We can’t stop it, so we must embrace the changes. It is exciting to watch their lives unfold and how our roles in their lives change.”

I think the best thing I’ve learned is to let my son find his own motivation. At 16, there's not much parental pressure that is of any help. Guidance, yes. Questions, yes. But pressure. Bad idea. He wants to be a cop. Sigh. I don't sigh in front of him, but have to hold that with open hands and weak knees. It's also wonderful to see him find faith without us preaching. God pursues him. He sings so beautifully, standing beside me in church, I sometimes don’t sing just so I can hear his voice.

I don’t agree with the common social thought that it’s the journey that matters, not the destination. There’s no point to a journey unless you know where you are going. I have a hunch that when we get to heaven, we will find out it was all about the destination after all.

I had a writer friend critique my article on Dachau Concentration Camp and the only suggestion she made was to include a hypothesis as to why men would be able to accept atrocity as common place. My response after the message from the third chapter of John this morning in church, is that I believe the capacity for darkness and evil is the result of rejecting Jesus, the Light of the world.