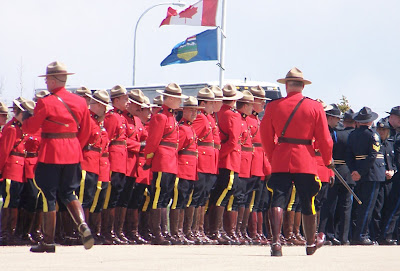 It was their faces I’ll remember. Row after row of young men and women march past in Red Serge and High Browns. Other regiments followed in Review Order or their particular red or navy dress uniform, bearing themselves with dignity and honor. RCMP, City Police, Sherriffs, Correctional Officers, EMTs, Firefighters and more, here to salute their fallen comrade, represent their own force.

Their faces – so serious, so young. Yes, there are chiseled and sharp featured ones, and more mature officers in command. They file in silently, fill row after row of chairs in the arena. A brilliant mosaic of colour, pageantry and loyalty.

I sit in the front row and study the portrait of James Lundblad. Serious and passionate, he persevered relentlessly until he realized his dream of becoming an RCMP officer. He served for seven years until a tragic auto accident in the line of duty. Now we sit with 700 others to pay tribute to his legacy of service. We share stories and we also hear of the laughter he shared with his colleagues.

My brother Jack met a similar fate. An outstanding Marine, preparing to depart for officer candidate school after finishing boot camp with top honors. He was killed in a car accident at age 26. We buried him on his birthday.

So many similarities I consider as I look at the overload of flowers surrounding the casket, listen to the music, the eulogy, the tributes. It’s my father-in-law’s unplanned comments that make me sit up straighter.

“One word comes to mind about James: loyalty.”

That is exactly how I have described my son. Loyalty to his friends is his watchword. His relationships are paramount. He has already begun preparing himself for a career in law enforcement. Only 16, he takes legal studies in high school and physical education to keep himself actively fit.

He will soon be part of this rank, these peace officers. I try not to dwell on the thought that he could one day join the brotherhood of the fallen as well. I muse about how he would like the uniform, the short cropped hair, the headdress, the marching, the discipline.

Even in the midst of their grief, I believe James’ parents were never more proud. And I would be too.

As we shared over refreshments in the Memorial Hall, I see the faces again. All dignified, but now more relaxed, sharing stories and laughing together to release the tension that had not yet vented itself in tears. Closer up I see each one looks like my son, my son's friends. He would like these men and women. I wish he could have been here.

I make a mental note to help prepare him in every way possible to be the best he can be, physically, mentally, morally and spiritually. So that if I ever again must attend a memorial for a fallen officer, my son’s face will be among the serious, young faces I see marching in row by row. And he will be laughing with them afterwards as they share refreshments in the Memorial Hall.