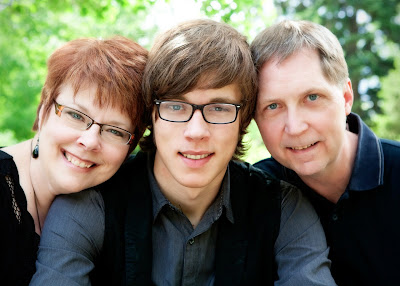 After I graduated from Grace, Brent and I married Aug. 81 and moved to Lloydminster - a town that straddles the border between Alberta and Saskatchewan. To put it mildly, it was culture shock. I left everything and everyone I knew and worked to find my place in Brent’s circle of family and friends. We were there five years; we led youth and young married couples’ activities and a singing group. I worked administrative and retail jobs before landing a government position with Social Services (Welfare). It was administrative but introduced me to computers. I attained certification as a social worker but never pursued employment in that field.

In 1986, Brent transferred to Calgary, Alberta with Husky Energy and Husky hired me for their I.T. department as a computer security programmer/analyst. Five years later, I transferred to NOVA Corporation as Administrative Supervisor. My job was to hire, train and supervise staff to provide admin. support for 150 engineers.

We were active in First Alliance Church, the largest one in the city. In 1990, a smaller CMA church invited me to direct their choir, which I did on a volunteer basis for six years. We put on mega musicals, organized another singing group (that took several regional tours) and it was a crazy wonderful insane ministry. I also coordinated two interdenominational choir trips to Europe in 1990 and 1995, got to sing "The Lords Prayer" as a soloist in Notre Dame Cathedral in Paris (1990) and direct choir and solo in front of 3000 people at one of the official 50th Anniversary Liberation Festivities in the Netherlands (1995).

In 1991, we bought a ridiculously expensive house and I felt like we had sold our souls because the mortgage would require both our incomes and I wouldn't be able to stay home if we had children. After some negotiations with Brent, he agreed we would have one child if I would work part time. We had Andrew in November 1992 and my life exploded exponentially in my understanding and concept of love. Andrew is such a gift. He was a typical boy and challenged us often, but he's become an amazing young man.

When I returned to work after maternity leave, I had a difficult time finding appropriate care for our son. While NOVA gave lip service to supporting “part time” working mothers, my department of engineers still expected the same results. Since I was working half time, I explained it would either take twice as long or would be half as good. Eventually the company and I agreed to a mutual parting of ways. They gave me a severance package including six months pay and career retraining. That particular experience led me to avoid working with engineers. We don't speak the same language.

Not long after, Brent accepted a position in the Middle East, Qatar, but we never left Canada. His work circumstances at Husky changed, so he decided to stay in his current job. In August 2010, he celebrated 30 years as an employee of Husky Energy.

It was a good thing we stayed in North America as my mother developed colon cancer. It spread to her liver and she died on Mother's Day in 1996. I spent five weeks in Missouri caring for her before her death and organizing my father after the fact. Brent then accepted a transfer to northern Alberta, in a remote village located where the road ends, literally. This was also a good thing, financially. They paid well to keep people in this remote place so we were able to sock away some significant savings. We attended a very small evangelical church, I helped find a new pastor and led Sunday school and music on occasion, served as school council chairperson and got a part time job with a regional airline. The flight privileges saved my sanity. I flew to Edmonton or Calgary at least once a month to connect with friends and restock necessities. I also discovered online Scrabble and (safe) chat rooms on the Internet and that kept me connected to the outside world.

We spent almost five years in Rainbow Lake. It was truly a wilder-ness experience. Being less distracted in the northern tundra, I had many wrestling matches with God under the spectacular northern lights, arguing about the lot he had given me in life. God didn't cripple the socket of my hip like he did with Jacob but I left my gall bladder at the hospital the week of my son's 7th birthday. I home-schooled Andrew for grade three, the year we knew we would move back to the big city and one day during Math lesson I had the privilege of praying with him as he accepted Christ.

Returning to Calgary in 2001, we purchased our "dream house" and I felt like I had come home. We returned to First Alliance Church, both of us got involved in music and drama. Brent had a couple lead roles in productions. I didn't look for a job right then because of homeschooling Andrew. However, I spiraled into depression and didn't surface for a couple years. Eventually, I got an administrative job in education and really excelled, first with a public elementary school and then with a Christian private school where Andrew attended for two years. I quit this job when Andrew enrolled in a hockey-based sport school. My wrestling continued with God.

I stayed off work again but this time, I was ready to beat the depression and get healthy. I had been significantly overweight for more than a decade. I found a weight reduction program and fitness routine that worked for me and dropped to my recommended body weight. After 18 months, in the fall of 2007, a friend suggested I should take my writing to the next level and I started taking classes with a writers’ society. In addition, God opened the door for me to work in our large church. After six months as an administrator, they asked if I’d take on the role of Communications Manager, being paid to write!

From July 2007 to October 2008, we lived in a pressure cooker at home. Andrew had been a goaltender at youth hockey’s elite level but this became a black year and a bad season, bookended by two murders that touched the team. Since he loved skiing, he also joined a competitive freestyle ski team (moguls, flips, spins, big air jumps). Two sports meant he was out almost every night and both weekend days. School suffered. We also relocated to a different house – one with a spectacular view of the Rocky Mountains. That was the only reason I agreed to move. However, getting our house ready to sell, finding a new place and getting it ready for occupancy took a toll. We took a 21 day Best of Europe tour in July 2007 and then celebrated my 50th birthday and my in-law’s 50th anniversary by taking them with us on a cruise of the Hawaiian islands over Christmas. The trips were great, but they added to the stress level. You know how it is, you need a vacation to recover from your vacation sometimes.

I had to undergo surgery in June 2008 (female problems) and after a slow summer of recovery, realized I could not keep up with everything and maintain my health as well, so I resigned my position at the church in October. It was my goal to take better care of myself, my home, my family and to write for publication. I started hiking, swimming and working out at the YMCA. However, I also volunteered as a group leader in Alpha (a weekly study for women), took on leadership of a Bible study for couples, started taking writing classes, formed a writer's group, started submitting work for publication, joined the board of a Christian writers’ fellowship and planned a writers’ workshop for 60 people… perhaps I needed to remind myself of goal #1 – take better care of myself…

In June 2009, I needed a second surgery (required to repair what did not succeed from the previous surgery). Due to a longer recovery period, I was unable to do the active things that kept my spirits up and my weight down, so my health deteriorated again.

My husband is a decent guy, pulls more than his weight around here, works his tail off in a corporate middle management career. Yet he and I are total opposites, both controlling and opinionated. Either one of us could have easily walked away from this marriage on any given day, but for the grace of God and the restraint of the Spirit. Or perhaps underneath it all we really do kind of like each other. :-)

My spiritual health continues to be one of wrestling with God, struggling to believe that he loves me unabashedly, unreservedly, profoundly, deeply, totally, unconditionally. I've stopped trying to tell Him what my life should look like because he simply says, “Be still and know that I am God.”

I’ve appreciated the input of author Brennan Manning. The Furious Longing of God, Abba’s Child, Ragamuffin Gospel and The Importance of Being Foolish. I’ve also been working through The Artist’s Way by Julia Cameron (Creativity as a Spiritual Discipline) and God keeps pushing me towards Philippians (having the mind of Christ), and totally immersing me in the book of John (“Lord, to whom shall we go? Only You have the words of eternal life”). In the past couple of years, my writing has won awards and been published in several places. It brings it a little cash but not enough to even cover my writing expenses.

Our son entered university last fall 2010 on partial scholarship and is studying Psychology with a specialization in Sociology. He hopes to teach, counsel and/or work in prisons. He matured significantly between grade 12 and Christmas. Astonishing, really. We are grateful he's there, as it's one of the top universities in the country, even though it is private and Christian. However, due to the expense of tuition, I am going back to work. I'm just at the stage where they are checking my references and if all goes well, I'll be working soon with the public school board again in a senior administrative role.