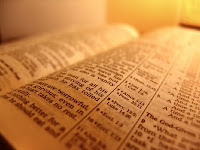 George Mueller is famous for establishing orphanages in England and joyfully depending upon God for his needs. My mother repeatedly sent me his article on "Ascertaining the Will of God" and it has been a wonderful guide throughout my life.

Mueller explains in his autobiography how he would begin his day. Contrary to his reputation as a man of prayer, he said the first goal was not prayer or to see how much he might serve the Lord or glorify the Lord or preach to others. But rather, he said, his goal was "to become happy in the Lord" and discover how his soul, his inner man, might be nourished, just as he would nourish his outer man (physical body) with food. For 40 years, he gave himself "to the reading of the word of God and to meditation on it so that my heart would be comforted, encouraged, warned, reproved, instructed." By meditating on it, his heart was brought into communion with the Lord and he would receive food for his soul.

"The result, I have found, to be almost invariably this," he said. "That after a very few minutes, my soul has been led to confession, or to thanksgiving, or to intercession, or to supplication. Though I did not, as it were, give myself to prayer but to meditation, it turned almost immediately, more or less, into prayer."

"Thus also," he continues, "the Lord is pleased to communicate that to me which very soon after I have found to become food for other believers though it was not for the sake of the public ministry of the word that I gave myself to meditation, but for the profit of my own inner man."

Perhaps this is where self-care is the most God-honoring thing we can do. Spending time, like Mary at Jesus' feet, choosing what is best, reveling in the delight of the Beloved.

The airlines have it right. You must put on your own oxygen mask before you assist those traveling with you. And we must "put on Christ" before we minister to others.
Amen. So be it.

This excerpt from Mueller's autobiography is taken from chapter five of John Piper's book, Desiring God which Christian Audio is offering as their free audiobook download for November. To download your own copy, go to this link and using the code NOV2009 when prompted during checkout. It's free and simple to set up an account. The first seven minutes of Part 5 (in the m4b version) includes the Mueller excerpt from which I quoted above.
© Joyce E. Rempel on 11/01/2009 09:22:00 am