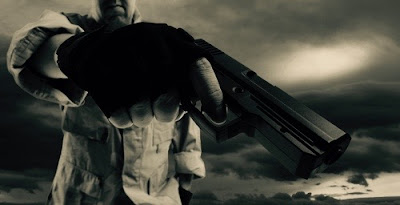 A friend posted a meme about whether you've had a gun stuck in your face and it reminded me of the infamous night after high school graduation. I was asked to go out for the evening by the valedictorian. He is smart but not too geeky and we have a lot in common, so I say yes.

We visit a social event involving his church at a local camp. Kind of an odd first date with not a lot going on, but he does buy me a soft drink using a $20 bill and pockets the change. The night is still young when we return to my house, but my parents aren't home, so we don't go inside. It's a hot, humid night in June but instead of leaving the car idling with the A/C on, my date turns off the engine and rolls down the windows while we talk. Nothing more. Just talk. Honest.

The house sits on a busy corner near the edge of town, where the city bus makes its farthest stop on the southwest route before turning north to go back to city center. It's quite normal to have a number of blue collar workers disembark the bus at this final outbound stop, as city transit is their only means of transportation, then walk past our place to reach home among the tiny houses south of us where the paved street and indoor plumbing ends.

Around 10 pm, the bus makes a short stop. Being engaged in conversation, I don't pay much attention but after the bus leaves, I begin to see the shadowy figure of someone loitering. Before long, the hoodied figure walks slowly across the street and strolls past, giving the car a long stare. It's unnerving, so I ask my date to lock the doors and roll up the windows but he doesn't close his window completely.

We go back to visiting, then suddenly, we hear a gruff voice at the window. "Give me your wallet and the lady's purse!" he demands. I turn to see a shadow filling the driver's window: eyes behind a balaclava and gloved hands (in summer)! One hand points a gun at us and the other pushes down hard on the half-open window.

Strange how you don't know what you'll do in that situation. You can plan and theorize all you want, but facing the barrel of a handgun brings out odd reactions.

I hear myself say, "I don't have anything in my purse. Can I just give you my wallet?" There's nothing in my wallet, either, except my driver's license and other ID, which, based on later experience, is such a hassle to replace that I wish I'd given him my purse and kept my wallet!

My date's first response? "I don't have any money!" And even with a gun pointing at us, I'm thinking, "Yes, you do! Just because you're getting robbed is no excuse for lying!" (Yeah, a little judgmental under stress.) So he gave up his wallet. And then the thug reaches past him for mine.

In my rebellious-youngest-child-in-a-big-family way, I watch myself hold the wallet just beyond the reach of his greedy criminal clutches, hoping my date will do something heroic like grab the gun, but then I hear, "Gimme your wallet or your date gets hurt."

So, I surrender my precious, brand new red leather wallet.

The thief makes some threat about counting to 20 before we move and "Don't follow me!" After he takes off, we catch our breath and my date starts the car, spinning tires, spitting gravel, chases after the crook, but the guy has already jogged across neighboring yards, disappearing into darkness.

We return home and call the cops. Half an hour later, my parents arrive home to see three police cars with lights flashing parked around the perimeter. They enter the house ashen faced, see me clutching the arm of my date so hard he probably has scars to this date from the fingernail gouges.

Yeah, as you would expect, that is our last date.

But that's not the end of it. It's too petty a crime for the police to bother investigating, but the Saturday newspaper includes a brief write up in the daily "Crime Report" with wording something like "Joyce Nickel and (my date's name) were robbed at gunpoint as they sat parked in the young woman's driveway."

I walk into church on Sunday only to be greeted by the chairman of the deacon's board (where he serves alongside my father). With a smirk on his face, he shakes my hand and loudly fires off his one-liner, "Hiya, Hot Lips!"