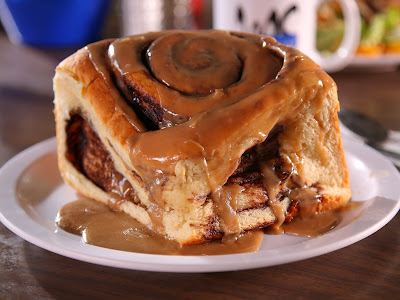 Walking out of church Saturday night, an acquaintance tossed a bag at us with something soft inside. Turns out it was a half dozen gooey caramel-cinnamon buns. This gentleman gives them away from time to time, sometimes to friends, sometimes to strangers, as a random act of kindness. Bless him! It sure put a smile on our faces! This is only the second time I've risked digestive disturbance by eating cinnamon rolls - something which contains wheat. Since I’m only “wheat sensitive” and not severely allergic or celiac, the reward is worth the risk.

“Why even risk it?” you may ask. Well, let me explain. It has to do with my nose.

Nothing makes me recall sweet memories of my dear departed mother more quickly and with greater fondness than the smell of fresh baked cinnamon buns. They were her specialty, be it sticky caramel upside down rolls or soft, plump regular cinnamon-raisin rolls with caramel cream frosting. Really, a risk worth taking.

Scientists and psychologists have discovered that of the five senses, memories are most closely linked to smell. In this Psychology Today article, the author cites behavioral studies showing how some smells can trigger vivid emotional memories and induce the feeling of being brought back in time.

The smell of cinnamon rolls catapults me into my childhood in Mom’s kitchen where she’d roll out the dough on the wooden butcher-block top of the portable dishwasher. She’d be bustling about, flour on her nose, her apron. Only occasionally would she let me help with any of the tasks: prep the oven, melt and spread the butter, scatter a good amount of soft brown sugar, evenly toss on handfuls of well-soaked/rinsed/drained raisins, sprinkle a generous (“But not too much!”) portion of ground cinnamon over the whole, carefully roll it up and pinch the edges together snugly, then evenly slice the individual rolls with a sharp knife and place them in orderly rows and columns, barely touching, on a baking sheet.

To this day, the scent of cinnamon buns, or cinnamon in anything, will send me down that path and I remember my mom with fondness. “Unfortunately,” author Jordan Lewis says, “smells can also be potent triggers of negative emotions, particularly in individuals with posttraumatic stress disorder (PTSD).”

If you find yourself “triggered” with an emotion, good or bad, stop to think about what your nose is taking in at that particular point in time. While my experience with cinnamon is sweet, someone else might have the opposite response. While parmesan cheese makes some people drool with anticipation, my husband thinks it smells like a baby bib soiled with burp up. Another example Lewis gives is about the smell of diesel. It was a trigger for one soldier’s buried memory of a trauma.

In addition to being the sense most closely linked to memory, smell is also highly emotive.  The perfume industry is built around this connection, with perfumers developing fragrances that seek to convey a vast array of emotions and feelings; from desire to power, vitality to relaxation. It is also important in your attraction to another person, sometimes leading you to choose your spouse.

While smell brings positive benefits, its absence can have the opposite effect. Fifth Sense, a charity for people affected by smell and taste disorders, addresses the psychological impact of smell loss. “Truly,” they say, “you don’t know what you’ve got ‘til it’s gone.” Losing one’s sense of smell can result in the loss of an important sentimental pathway to memories, a connection to the world around you, causing feelings of isolation and experiencing a ‘blunting’ of the emotions. “The loss of smell can affect one’s ability to form and maintain close personal relationships and can lead to depression.”

Other of our five senses can also trigger good and bad memories, but the one that most directly links to our memory center is the sense of smell. So, “be careful little nose, what you smell!” If a smell triggers a negative emotion – which is out of proportion to the present day incident – it may be triggering a suppressed memory of a trauma. Don’t hesitate to seek professional help, if needed, to make “sense” of it all.