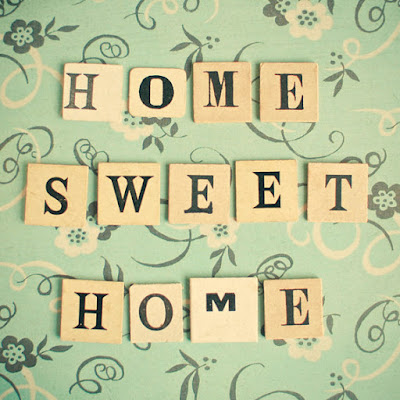 It was not natural to have come from there. Yes, write about it if I like or anything if I like but not there, there is no there there. ~Gertrude Stein

One winter’s night while scanning through old photos, I counted up all the places I’d lived. While I lived in the same home for my first 18 years, I moved eleven times as a university student, living wherever was available during each semester break or summer. I've lived in twelve different places since that time. A total of two dozen homes. My realtor says the average time one spends in any house is 2.5 years. Apparently, I am average.

What follows is a rough draft highlighting most of the places I've lived in Canada and a few snatched memories. Time for today does not allow me to flesh it out as I would like, or as Rainer Maria Rilke said, in Letters to a Young Poet, "...describe all these with loving, quiet, humble sincerity, and use, to express yourself, the things in your environment, the images from your dreams, and the objects of your memory. If your daily life seems poor, do not blame it; blame yourself, tell yourself that you are not poet enough to call forth its riches." I hope to call forth these riches in a future memoir. What follows here is "just the facts, ma'am."

After marriage in 1981, I moved to a small town where my husband lived on the border between Alberta and Saskatchewan.  He had located a "starter apartment" but within a year we moved to a newer, more spacious location. During our second year, a roomy bungalow owned by family friends came up for rent and this is where we will begin.

I invite you to walk down memory lane with me, reliving these places for which there is no longer any there there. While I could not tell you all of these addresses which at one time were part of my intrinsic identity, these places shaped me. While greater shaping was done by the people in those homes and the activities around them than by the walls, I look back on most of these buildings with something akin to fondness. Not everything, but most. This is not the case for everyone, but it is the case for me. 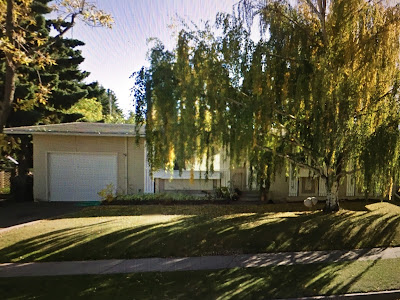 The best part of this home was that our friends Pamela and Murray lived right around the corner. Here Brent and I bought our first new car together and adopted our first dog, Munchkin, thanks to the influence of Keith and Diane who had already adopted the sibling, Muffin. Brent's dad planted the large garden in the back yard but, unfortunately, we were hit with severe watering restrictions that summer and about the only thing that survived were the potatoes.

The house had been owned by retirees and more retirees lived on either side, so they kept immaculate lawns, gardens, flowers and kept a close eye on things, if you know what I mean. I loved the tiger lilies in the large back yard and the weeping willow in the front, except in autumn when raking the leaves was an endless task. I cherish the memory of many suppers shared with family and friends, relaxing on the patio, going home for lunch, hosting young couples' Bible study, and enjoying the roomy basement with lots of storage and a cold cellar. I didn't care for the purple walls in the master bedroom, so that was the first change after we purchased the house in a private sale one year later.

We were young and the appeal of consumer goods led us into debt rather quickly. After about three years, the taxes, maintenance costs and high interest rates on our sizeable mortgage and car payments were becoming a heavy burden. We decided to downsize and rent for a while. 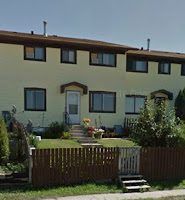 Marshall, Saskatchewan
Six months from spring to fall of 1985. No landlord in Lloydminster wanted pets in their property, so after a long search, we found a 2-story townhouse in a tiny hamlet east of town. The thing I loved about this place was the endless prairie right outside the door. However, the stay was short, because the drive was long and the commute wore thin within a few months. Not to mention the persistent odor in the spare room which helped spur our departure. 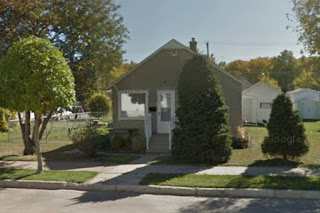 One-half block away from the Provincial Building, where I worked for Alberta Social Services, this tiny house came available. We could go home for lunch again. Lots of yard for the dog, roomy parking area, small and dated but quaint. We lived here two months before Brent received a promotion and transfer to Calgary. We moved in January 1986. 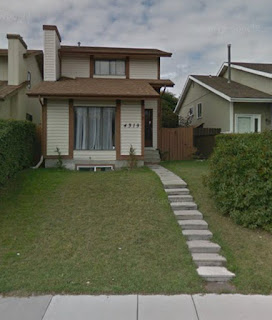 In the '80s, many people walked away from their houses when the values plummeted and mortgages were higher than the value of the property. The provincial government was on the hook because they had ensured the mortgages. So they offered hundreds of these homes for rent, then later for sale at a reasonable amount. We rented for several years, then purchased, and later sold again at a significant profit. It was 1,500 square feet on two floors with a finished family room and storage space in the basement, a "chimney stack" house we called it, but a roomy, smart design. We said goodbye to Munchkin in this house but spent January 1986 to March 1992 here. On one visit, my dad built a shed in the back yard and evened up those front steps - heavy concrete stones which were all wobbly and awry when we moved in. Quite the labor intensive project.

By this time, Brent's parents were tiring of living in their motor home year round, so they used our place as home base during the six months when they were not in Arizona. In spring of 1992 when we were expecting Andrew, it was time to up-size our living space. 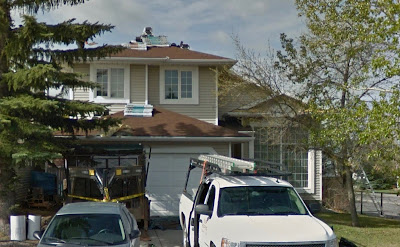 Location, location, location. This is what my realtor warned when I asked his opinion on this show home we'd fallen in love with. A new development in Riverbend with estate homes, but this one was a corner lot on a busy street. Again we followed our hearts instead of our heads and purchased the gorgeous property. The snow shovelling and traffic, the noise of nearby construction, as well as finishing the landscaping nearly finished us off, along with the lack of sleep as new parents. After two years, Brent accepted a job in the middle east, so we sold at a loss because the market was down again and took an apartment downtown until he had to report for duty in three months time. 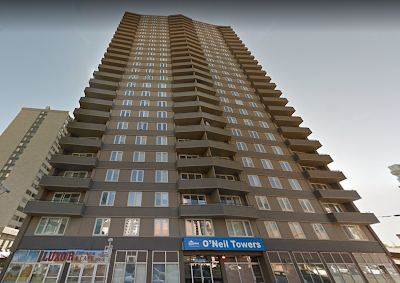 It was a temporary arrangement. Top floor, only blocks from Brent's office and a stone's throw from the river pathways. But noisy with sirens, crowded parking, no in-suite laundry and so many people sharing the common spaces.

Odd thing was, once we started telling friends about our imminent overseas move, some warned us to reconsider, since the new job was with a middle eastern government, not a North American company. We re-worked the numbers and did more investigation which led us to see that it was not as financially viable or secure as we had first been led to believe. We also discovered my permanent residency would be compromised by a long overseas assignment and I would have to re-apply if I stayed away longer than six months. This prompted my decision to take on Canadian citizenship. In the meantime, circumstances improved greatly at Brent's current job, so we made the decision not to go overseas. He stayed with his current employer.

Well. There we are, downtown. Not an ideal situation with a young toddler. We celebrated Andrew's second birthday and Christmas 1994 but received the hammer blow of my mother's terminal cancer diagnosis. I had a car collision coming into downtown which totalled the vehicle, then in a bizzare and frightening incident, I was physically assaulted in the elevator by a mentally-challenged man in the elevator. Though I only had minor bruises on my shins, I was done with downtown apartment living. Like a mother bear, I went on a rampage looking for a house and by the end of that month, after only four months, we moved again. 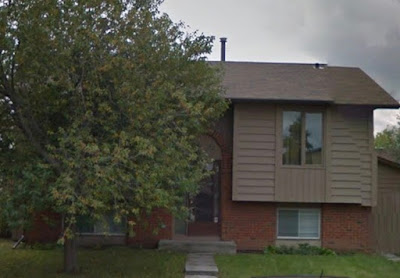 Andrew called this place our "brown castle." It was a haven. Four bedrooms, fully developed bi-level with a family room and roomy kitchen, a big yard, a swing set, gardening space and a garage. We were close to our church where I was choir director and Andrew attended playschool. It was mercifully close to several of my dear friends who had children Andrew's age. Based on all that was happening, I was experiencing depression but did not know it at the time. However, my friend Anna taught me to garden, so I enjoyed several summers of glorious flowers, a yard for Andrew to play, a next door neighbor girl who babysat, a sense of true community amongst our neighbors and a reprieve from the crazy busy life of the city centre. I even tackled the heavy lifting of leveling those concrete block steps in front because they were uneven and wobbly. We replaced quite a few floor boards on the deck and repainted. I had another collision (not my fault) which totalled our second vehicle. We bought our first piano here and Andrew had his first croup (or asthma) attack, requiring an ambulance call and treatment by EMT but, thankfully, no hospitalization. In the fall, he enjoyed his first trick-or-treating experience. My mom and dad visited on her 80th birthday before the cancer had really taken hold. I would lose her a year later. It was precious time.

We moved north to Rainbow Lake the summer after she died. I have pictures somewhere but need to close this for today. We spent 4 1/2 years there, got our dog Tickles, then traded her for Bernadette, lived a lot of life, Andrew discovered video games (Legend of Zelda), developed a love for snow, learned to skate and play hockey, Brent became a supervisor, I had my gall bladder removed and depression officially diagnosed, some joy, some real pain, then returned to Calgary in 2001. Since the financial benefits of living in the remote north made it possible to get a larger home than we could have otherwise, we bought a big place in Riverbend only a two minute walk from the river. I thought I'd found the house I would live in until my death, but in 2008, Brent insisted on moving to Douglasdale. The mountain view convinced me. I've been here ever since.

It was close to my job, was near our church and offered better schooling options for Andrew. We became empty nesters here, I started and ended three jobs, buried Brent and Bernadette, took in a boarder, then married Henry. Life is more settled, we have both retired, we have no desire to move. This is home, and here, love resides.


It is a funny thing about addresses where you live. When you live there you know it so well that it is like an identity, a thing that is so much a thing that it could not ever be any other thing and then you live somewhere else and years later, the address that was so much an address that it was like your name and you said it as if it was not an address but something that was living and then years after you do not know what the address was and when you say it is not a name anymore but something you cannot remember. That is what makes your identity not a thing that exists but something you do or do not remember. ~Gertrude Stein