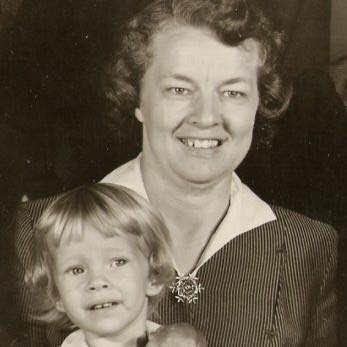 My mother was born 102 years ago on this date. She birthed and raised eight children. She worked hard to keep me occupied as I was the last (only) at home both as a preschooler and as a high schooler. She'd let me "help" make cinnamon buns, get me to use my imagination in play about throw rugs becoming houses, encourage me to read, help me memorize songs, take me on the bus downtown to Kresgee's (?) or Woolworths on the Square to shop and even maybe have lunch as a special treat.

I recall the nights she would sit at the dining room table writing letters to family or to missionaries. She always included a pamphlet or clipping with a story or scripture - I received the same ones on more than one occasion after I left home.

One year when I was still in elementary school, she held a position in the PTA. She spent long hours stressing over a presentation to them - even practiced it on me - about life balance - like spokes in a wheel needing to be in proportion.

Her answer to most problems was to serve more food.

She was a well educated, intelligent woman who had set aside her own dreams of ministry as a missionary to Africa and instead, served humbly and sacrificially as a mother of her own tribe. After we were grown, she spent her remaining years as Sunday School teacher or caregiver to whatever little ones who were brought to church.

I spent three weeks caring for her as she was dying of cancer. She taught me what "dying with dignity" truly means, in the midst of the most undignified circumstances. One night, she clearly spoke the last lucid words I heard from her as she sat in the recliner, drifting in and out. In the quiet, she threw up her hands to the ceiling like throwing leaves in the air, tossing her cares up to heaven, and exclaimed, "Just give it all to Jesus!" Best advice given or received.

Thus ended the life she also lived with dignity. Humbly serving, training, cooking, smiling, cover-her-mouth-shaking-laughing at the antics of her family with her hysterical silent "Momma Shake," wiping tears from her eyes. What fun she must be having now with Jesus and the little ones in heaven.
© Joyce E. Rempel on 6/23/2017 07:58:00 pm