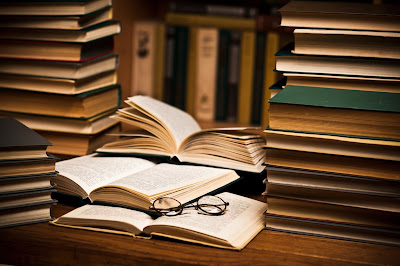 I was brought up “in the fear and admonition of the Lord" in an area of Missouri known as “the "golden belt buckle" of the Bible Belt. My folks instilled a love of reading in me, and my library included Nancy Drew, Trixie Belden, Boxcar Children, Hardy Boys, the encyclopedia, Reader’s Digest, the Bible, Danny Orlis, and other primarily Christian titles.

As a child, books occupied my free time. In grade three, my teacher, dear Miss Snyder, sponsored a contest to see who could read the most books throughout the school year. I won the award but was somewhat non-plussed when my prize was… wait for it… another book. Even then, I felt reading had to be for some ultimate purpose beyond just the love of reading.

I read ravenously as a teen, chewing through mysteries and “Christian romance” novels, until I entered university. The academic research and reading load was so great, I simply burned out on reading as entertainment and set it aside. As an adult, reading became utilitarian. I focused on self-help and how-to, but hardly any fiction, with the notable exception of JRR Tolkien and CS Lewis, of course. As my own child grew, my desire was to cultivate a love of reading in him also. We read together, I read to him, and my library expanded to include children’s classics, youth, comedy, graphic novels and YA books. Other than that, my exploration into the fiction genre has been quite limited and unfulfilling. Something was missing. I decided in retirement, it was time to change that.

So, I asked my Facebook friend, John D Blase, for a favor in compiling a recommended reading list of Fiction titles. As an author, poet and editor, John seemed the most credible literary candidate within my circle to help with this. Being the thoughtful and approachable gentleman he is, John responded in fairly short time, recruiting input from his own Facebook friends and followers.

Here was the criteria:


What are the top seven fiction titles you believe every person of faith should read? These would be titles to stretch your mind, challenge your worldview, crack you open with beauty, inspire you, bring you to tears or belly laughter or both. If you can't conjure up seven, at least try for four. And remember - fiction.

John started with his top titles and many of his friends responded. You can read the raw data on Facebook here. I collected and sorted those recommendations, which initially included 153 titles but I excluded a few nonfiction that snuck in and where a recommended book was part of a collection, I combined them. What follows is the list of books that received nods, sorted by number of mentions, then by author. I have included the title, author, year originally published and, in some cases, the sub-genre. At the end, I include the list of books only recommended by one person, sorted by Title.


Books Mentioned only once, sorted by title: