The Result of the Love of Thousands 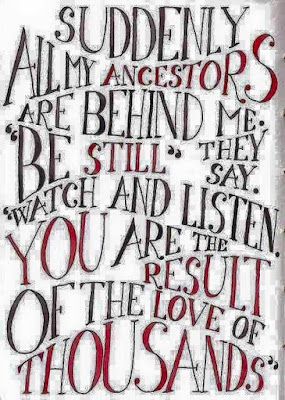 I've never been particularly intrigued by my ancestry. I enjoyed the anecdotal stories, but didn't spend time researching family history. However, today, inspired by a question from one of my nephews, and by the listing of Jesus' genealogy in the Christmas story, I dug out both my parents' genealogies and discover the following names in my lineage.

My paternal ancestors originated in West Prussia @1750 AD.  In 1893 great-grandparents left South Russia and sailed to North America. Their 9 year old son died during the transatlantic voyage and was buried at sea. My grandfather was 14. The family landed in Quebec, then continued via train to Kansas where they settled near other family members who had previously migrated.

Of all the people I have encountered in my life, I often sensed there might be relatives among them. Even Henry's family surname and mine were listed in the same community in the 1700s. I think I have Facebook friends that share many of the surnames in my list above. Six degrees (or less) of separation, indeed.
© Joyce E. Rempel on 12/13/2017 05:22:00 pm