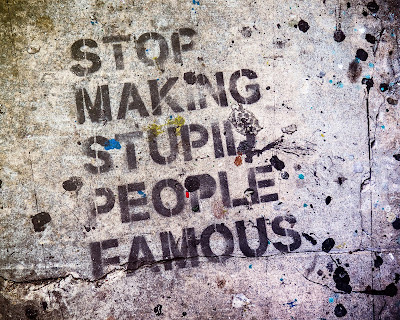 It continues to baffle me how so many people look to celebrities as "authorities" and swallow whatever they endorse. Many of these are actors who have spent their life perfecting the skill of pretending to be someone other than they really are. Or perfecting music. Or makeup. Their entire career has been spent learning the art of affectation and emotional manipulation to achieve a desired result. Now they ply their trade as spokespersons for their own world view. And for this, we reward them with the badge of "Expert on Everything"?

I am not suggesting every celebrity is stupid. Some are not well educated in anything other than their craft, others are quite brilliant but not broadly educated. Therefore, it does not follow that if they are good at one thing, they must be given credit in another. To become expert in ones own field or genre does not leave time to become a credible authority in every other subject.

Time worn motivations drive the human heart to seek out influence in order to satisfy its own desires. The pursuit of money, sex, and power has been a common theme since the beginning of the world. There are those who are succeeding, by human measure, at obtaining these goals and the rest follow like lemmings, hoping to gain similar status through mimicry.

"It works for them, and I like what they say, so maybe if I do the same, it will work for me!"

Sigh. All is vanity.

How's that working for you?

Learn rather to be an expert at thinking for yourself. Are you mindful of how music affects you? Can you distinguish between the actor and the character they depict? Who in life has most influenced you? Why do you respect them? Do you measure success by something other than net worth? Are your own motivations helping you attain peace and satisfaction? To whom or what do you look for authoritative guidance for your life, health, career and emotional maturity? Do you do your own research? Consider all sides of an issue? Investigate political candidates' views beyond what is reported by mainstream media? Ask questions? Actually check the numbers?

Do you have the backbone to choose for yourself? To say, "I will not be told what to think by someone who looks pretty and/or speaks well, but will choose the best path, after sober thought, for me and my future."