From Coma to Podium 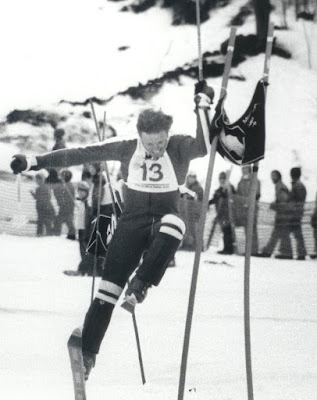 January 30, 2019 was the annual #BellLetsTalk day in Canada, raising over $7.2 million this year alone for mental health initiatives, as social media users worked toward ending the stigma surrounding mental health. The initiative encourages us to share our stories for the sake of understanding one another, getting the help we need, giving the help someone else needs, and removing the stigma attached to those suffering.

My own story includes the loss of my first husband to suicide, so this is personal. My friend, motivational speaker, radio personality, and Olympic Skier, “Jungle Jim" Hunter, shared part of his personal story and I thought it worthy to post here, to expand the conversation across North America.

Jim writes, “I often think how different my life could have been if I had not healed from the severe concussion that changed the direction of my life on June 21, 1963. I was ten years of age and smashed my head accidentally on two steel bars and a cement floor. I lay in a coma for almost three months. Dr. Greene found a solution and after following the protocol, I woke up. I didn't know anyone. I didn't know my name. I could no longer write with my right hand because it would shake. For 15 months I stayed in a dark, silent, room, and gradually learned to walk, talk, read, and write with my left hand, and read a book by Dorothea Brande called, Wake Up and Live.

“I would still get dizzy and fall over, but when I was finally ready to go back to school, they thought I could. I lasted one week when the school authorities said I could no longer go because I was 'mentally retarded'.

So, even though Jim's situation was caused by a physical injury, there was still stigma, and those who were quick to judge, unwilling to take the time to understand or investing in the resources to help.

“I was different. I was slow of speech, but one day my mother found me reading the books I loved the most, my Bible and Encyclopedias. She asked if I understood what I was reading. I nodded yes.

“So you understand you just can't keep up. I had no memory so had to journal everything, which I do to this day. I was odd. A new start in Calgary in a new school board maybe would be different but alas I was told, 'We don't have room for your kind here in this school.'

“I chose ski racing because the time on the course spoke for me when I didn't need to speak. I decided in my first race I would enter twice. Once as Mark Hunter (my real name) and the second time as Jim Hunter."

"Mark" fell 4 gates from the finish, and "Jim" started dead last in position #169 and finished in the same position. He then tells what came next. "The Skimeisters chose ten girls and 11 boys to go on to the next camp. The other boys were the fastest ten. The coach chose me as the 11th, they said, because 'If a kid has the desire to enter twice, we have to give him a chance for his effort.' For me, it decided who would be a ski racer and who would be a hockey player."

Jim shared the above photo, where he is already celebrating at the final gate before the finish in the 1976 Dual Slalom finals. “I heard people saying at the start that a Downhill Racer (like me) would never be a great slalom skier.” Jim explains, “In the photo, I’m celebrating because I had just beat one of the best slalom skiers in the world, Piero Gros.”

Jim concludes, “Victory is only ours if we secure victory over mental health.”

I agree with Jim. Let’s use the support and momentum of #BellLetsTalk to secure this victory! Share  your story, ask for help instead of suffering in silence or trying to conquer it alone. We were made for community, and no one has to struggle alone. Ask for help, share your struggles and successes, what helps and what is unhelpful, donate to organizations working effectively toward effective supports for mental health.

Not only do we need to remove the stigma around mental health issues, we also need to move beyond partial recovery with temporary, drug-induced “management” and instead let's fund effective research, develop targeted pharmaceuticals, and organize a multi-disciplinary approach to treatment of the whole person, body, mind, emotions and spirit.

Healing is our goal! Join in!