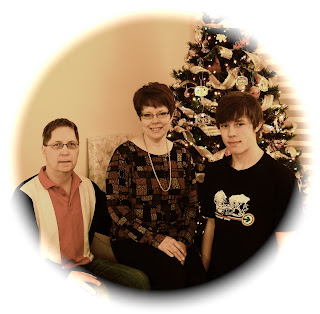 Almost as welcome as a World Book Annual (if not as current), here again are the major happenings of the past year in the Harback House.

Last year at this time we were all on a cruise ship for a Hawaiian island cruise with Brent’s parents, celebrating my (Joyce’s) 50th birthday (December 21, 2007) and Roy and Lila’s 50th wedding anniversary (officially July 5, 2008). The five of us shared two rooms on Norwegian Cruise Lines’ Pride of America. It was a great way to see Hawaii for our first-ever visit. We had seven ports of call in as many days. Delightful and memorable. Pictures are available online. Email me and I’ll send you the link.

As you may know, we sold our home and bought a different place a few kilometers south, still in the city of Calgary. We took possession on January 11, had the painter and carpet installers do their magic and moved in January 25. The bungalow sits nestled on a suburban hill with great view of the Rocky Mountains. It is a bit smaller than our last place, with less yard to maintain, and will suit us well as we gracefully age. However, with the exceptional cold temperatures and record snowfall so far this winter, the snow removal has become a bit tedious.

Andrew was playing hockey last year (as goaltender) - the only 15-year-old on his Junior team with mostly 17-year-old teammates. He also joined a freestyle ski team and trained four times per week, so he doesn’t mind the snow at all. He was quite thrilled when a picture of him and a buddy skiing opening day at the local ski resort was featured in the newspaper.

He competed in Provincials at the end of April in Jasper and did respectably well for his first year. He attended a 9-day summer ski camp at Whistler (site of the 2010 Winter Olympics) where he skied on the glacier into July. He got coaching from several freestyle skiers who’ve been featured in extreme ski videos. His ski season never ends, because the team trains on water ramps all summer. Landing in the water is a less risky way to practice their flips and tricks. I pray a lot for his safety.

In May, Brent attended a conference in St. Louis. I went along and we stopped in Minneapolis to do some sightseeing and shop at the Mall of America. During his conference, I drove down to Springfield and spent time with family. In July, I flew down again, this time to bring a vehicle back that we imported. At the time, the Canadian dollar was at par with the greenback, and we found a great deal on a next to new vehicle so it was well worth the trip (in spite of the plethora of paperwork and inspections required for import).

I had surgery in June, which limited my mobility for a while. I still have some lingering health issues, but lifestyle modifications have made them manageable while I await additional surgery in 2009.

July 5 marked the official date of Brent’s folks’ 50th wedding anniversary. Roy and Lila had a gathering with a few friends and we were able to be together at the event with most of our extended family: brother Brad & wife Tina and the kids (Max and Paige) along with nephew Mark & wife Kristine Alexander and niece Rachael & hubby Brett.

Brent continues his work with Husky Oil and does some limited traveling on business. Most of his trips are generally limited to western Canada, but he did spend a couple of weeks living out of a suitcase in Ohio where his employer bought a refinery. He didn’t mind too much and managed to see NHL games in both Columbus and Detroit while he was in the vicinity.

We both have enjoyed being involved in a small group through church and took on leadership of the group this fall. I also lead an Alpha table on Tuesday morning for women. I sing occasionally in the worship team. I resigned my position as Communication Manager at the church this fall – I finally decided I just can’t do it all! I am now able to focus more effectively on being a wife and mother and I’m doing some freelance writing in my spare time. I was thrilled to win my first cash award this summer in the Christian Publishers’ Poetry Contest.

In August, we traveled with friends to Ontario and Quebec. We spent 10 days taking in the historical sites of Ottawa, Montreal and Quebec City. By far, the highlight was getting to see some of the pageantry surrounding Quebec City’s 400th birthday. The rest of the summer, we “camped” a few weekends with our little travel trailer and fit in hiking and mountain biking where possible.

In the winter, we like to get to the mountains to ski. As I write this, I’m sitting in a hotel in Revelstoke, B.C., where Andrew and I are thoroughly enjoying the fresh powder at a new ski hill with North America’s longest vertical descent. This trip was Andrew’s Christmas present. We’re enjoying a few days here with several of his ski team buddies and their families. Brent is holding down the fort at home, keeping the dog company and taking in a couple of NHL games.

Well, that’s about it for the highlights. We also have our struggles, as everyone does, but continue to trust in our heavenly Father’s loving care, grace and tender mercies. May His peace be yours in this Christmas season and throughout the New Year.