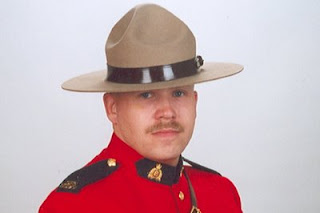 May 5, 2009: 41 year old RCMP Const. James Lundblad died when his police cruiser was struck by a grain truck on an Alberta highway. Const. Lundblad was pursuing a speeding vehicle.

James was the son of Lloyd and Noella Lundblad of Valleyview, Alberta, nephew to Lila Harback (my mother in law) and first cousin to my husband.

Funeral services will be held Monday, May 11. Pray for the family. It is a sad way to spend Mother's Day weekend, preparing to bury your only son.