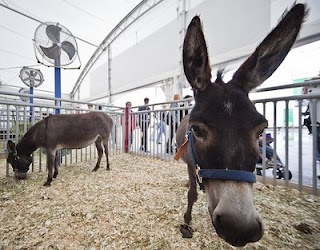 It was supposed to be a Stampede Pancake Breakfast. But something went awry.
Don't get me wrong. I love the Calgary Stampede. But it is best enjoyed in small doses. A few hours wandering through the barns and the booths before settling onto the edge a good seat for the rumbling rush of the chuckwagon races and the gaping-mouth spectacular grandstand show.
The problem is, I hate crowds (does anyone actually love them?). I was raised by parents who held the philosophy that if everybody is going one way, we should likely go the other. Even Mark Twain quipped, "Whenever you find yourself on the side of the majority, it is time to pause and reflect."*
So, today when I turned, as normal—to get a triple grande, extra-hot, skinny, Cinnamon Dolce latte at the green circle café—and found a traffic jam, I was not a happy cowgirl. 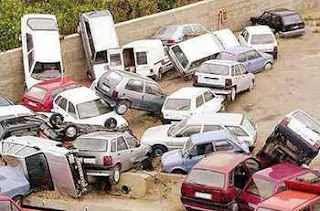 parking lot not exactly as illustrated
Cars were parked sideways, backwards, cockeyed and foolhardy. Those not parked were looking in vain for a spot. All the normal parking places in front of the grocery store had been taken up by griddles and grills, tables of food, a trailer turned Stampede performance stage (complete with monstrous speakers to wake the neighborhood), a petting zoo, bales of hay and curb-to-curb Stetson-wearing flapjack seekers. Not a single traffic cop or courtesy clerk directing traffic. Children running in and out of parked cars like calves out of the roping chutes.
The rodeo prize money, though, had to be reserved for the poor truck driver who was trying to wrestle his 18 wheeler into it's proper corral for his regular grocery delivery. He's stuck in the middle of a pancake breakfast, nearly jack-knifed trying to get past one car triple-parked and two cars doing the double double. It simply wasn't going to happen. No matter what helpful signals the pancake-eating Sobey's guy could give, the huge semi was stalled, blocking traffic north and south in grand western style.
Don't tell the Marshall, but I had brief gleeful visions of him backing right over the sub-compact and making some sort of Mazda pancake. I wonder if the absentee cowpoke driver would have thought the free grub was worth it then?
Aw, I don't begrudge neighborhoods their free Stampede breakfast. It's just that some people don the black hat of greed and, come hell or high water, they are going to get their free food even though the $2 hotcakes and coffee at McD's just across the trough would be fresher and faster.
And as I sat in my vehicle, waiting to pass the stranded semi to exit the excitement, it was then I finally realized: It's not about the food. It's about the party. No one was honking. The only frustrated person on the lot was the semi driver. Stampede is a reason to kick back and slip out of work for an hour, a reason to sleep in and spend a leisurely morning with the kids petting lambs and tugging along helium balloons. It's the adventure of going on the flapjack finding safari that nets the big score: real orange juice and bacon alongside the hotcakes fresh off the grill, all the while listening to a professional country singer rocking the lot.
It's about being part of the Greatest Outdoor Show on Earth. I sound like the marketing department. And I don't even like crowds. But I like Stampede. 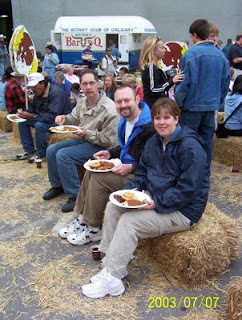