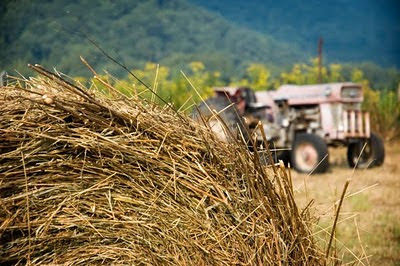 Have you ever noticed how some people can literally make themselves sick over a relational conflict? A friend shared a story about a farmer who was doing just that by warring with his neighbors.

Years before, when the man’s grandfather owned the property, the RM planned a nearby road. They had to find a way around a low, wet spot, so the divergent road was routed across part of the farmer’s land, creating a Right of Way between his property and the neighbor to the west. As compensation for using his land, the RM let the grandfather farm the Right of Way. Three generations had since baled hay on the small stretch of land.

One day, the neighbour, who wasn’t privy to the original agreement, decided it was his turn to farm the Right of Way. He got his son and nephew to start building a fence. The farmer would come over to confront them and the young men would run and hide. He'd pull up the fence posts and leave. They'd come back and put them in. On and on it went.

Finally the farmer reported it to the police. He told the responding officer that the entire situation upset him so much it was going to give him a heart attack.

The officer asked, “How much hay do you get from it?”

At the time, round bales were worth $180 each. Multiply by three, then deduct labour and fuel and wear and tear on equipment. For this, the farmer was going to have a heart attack. He was making himself sick over something that was worth less than five hundred dollars.

There is a cost for everything. It’s not always in dollars and cents. What are you making yourself sick over? You need to figure out if it is worth the price in time, money, relationships and emotion. Is it more important to be right or to be healthy? Is winning your current fight worth the toll it takes? Do you even know what it is costing you?