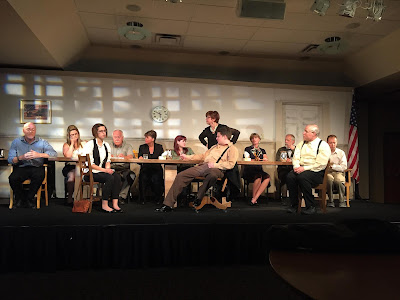 For five months, I have been immersed in preparing for this moment. Two performances down, one to go. Closing night.

In January, in a crowded rehearsal room with 34 other souls, we read snippets of characters we did not know.

Now, I know them all.

Intimately, almost. Or I think I do. As well as 1:24 hours of dialogue allow us to know twelve strangers around a jury table. Away from the jury room, I hear them tell their story, their background, where they came from, why their anger rises.

Sometimes our anger rises, too.

We push against and play with each one. Go home in shambles after a one sentence critique hits a soft place, reopens an old wound or pours salt on a current one. Talk long, think longer, memorize day in and day out the words of our character, explore, stretch and dance with the nuances of their nature, allow them to commandeer our body during rehearsal and bid them go to their corner and sit quiet when not rehearsing.

But she doesn’t sit quiet, Number 10 Juror. Not in me. She looks for gaudy rings at the thrift shop. She searches magazines for the perfect hairstyle, puruses the beauty counters at The Bay for the perfect shade of pink lipstick to match the shellac nails, eyes multi-rows of frames at the optometrist for the perfect animal-print cats-eyed pair. She startles me from the mirror when her haircolor wins the day at the salon despite all attempts to mute it. She tries to tunnel her bigotry into my head with a low, melodic southern drawl musing about who might move in to the house for sale next door.

I bid her be silent but she speaks in every nook and cranny.

Until I put her in her place. On stage. Only. Ever. Always. Just another character I will portray. One with whom I will spend these few days. We will dance, and she will not step on my toes. She is to be shown the light for the blindness she denies. And laughed at for taking her own opinion too seriously.

And then, when the curtain closes and the house lights rise, she will return to the pages of the now-closed script, to be referenced only as an example of one relationship that was doomed to end.

But one that has taught me much about human nature and the necessity of the examined life.

Rest well, #10. Thank you for the decadent dance.