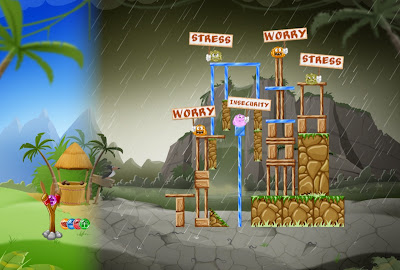 I've blogged before, here and here, about the negative narrative that runs a common track in my mind, around and around like the model trains we used to build as kids. It looks the same every time it circles around. Once in a while we'll put a plastic cow on the track to try to derail it. Sometimes it does, but oddly, we always set that negative train upright and it starts going around the track again. Sometimes we run it at night and it seems more mysterious but with that light on the engine, these thoughts always seem to stay on the same track, over and over. I found it difficult - even with good friends, prayer, journaling, meditation and therapy - to break free from this kind of habitual, unwanted, negative rumination.

Part of my intentional attempt to change my thinking has come by enrolling in an online tool called Happify. I've used it sporadically over the past three or four months and I can attest that it's made a difference. I'm not getting paid to promote them, I'm just one beggar telling another beggar where to find bread, and enjoying the journey in the process.

It is scientifically based, and from their website, they affirm that it's an exciting time for those who want to overcome negative thoughts, worries, and everyday stress. "Happify has turned a decade’s worth of research into a series of activities and games that train your brain and build skills for lasting happiness." That's their mission. And it's effective and measurable.

It's created with leading experts. You'll find many places on the internet that talk about the science of happiness. It's true, the science of happiness is as real, substantiated, and exciting as other areas of science that are changing our lives for the better. Happify tracks were created with the best and brightest minds—experts, research scientists, and practitioners—who are passionate about improving people's lives.

It fits into my life, into my schedule and transforms it. Their "cheerful games and activities are deceptively effective. And they can be used anytime, anywhere—on your smart phone, tablet or computer. Small slices of time can make big-time changes."

I've found this to be a helpful and fun tool. Here's some of what my exercises and games today helped me learn about these interruptive, sometimes debilitating, negative, intrusive thoughts:

To defuse negative thoughts, the last thing you want to do is to concentrate on them. Successful defusion techniques include observing the physical sensations that accompany what you're feeling, asking yourself if you're making your own interpretations on reality, and countering negative thoughts with new thoughts that are grounded in reality, rather than a skewed perception of reality.

Mindfulness meditation helps you avoid harmful round-and-round rumination. Becoming more aware of the present moment allows you to better recognize any never-ending negative thought patterns holding you captive. Observing is half the battle; it’s when you see the thought trap trying to barricade you that you’ll be able to break free from it.

Acceptance and Commitment Therapy is a type of mindfulness-based therapy that aims to help people accept life’s tribulations. By encouraging you to be present and Accept reactions, Choose directions and Take action (ACT), the treatment teaches you to work with what you have. These strategies include realizing thoughts and feelings for what they really are instead of what we think they are, and acknowledging that we can control how we react, think, and feel.

That's just a sample of the kind of information they share. But I like the games. Shhh, don't tell anyone, but my inner child has a lot of fun with "Uplift" and "Knock Out" (it's patterned a lot after "Angry Birds" and the picture at the top of this blog is a screen shot from the game). And even though they seem like common video games and simple reflective exercises, they combine it with beautiful visuals, more complex meditations and journaling, along with explaining why it works - if you're into that - and it truly does make a difference.

People who start using Happify see dramatic improvements in their positive emotions and overall life satisfaction. This isn’t marketing. This is what the users say. Over 86 percent get happier in two months. If you want to check it out, go to happify.com. I'm glad I did.