Preaching is Easy but Practicing is Hard 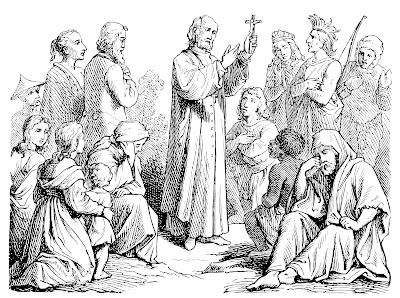 I am the daughter of a preacher man who was also a mechanic, a poet, a musician and inventor. There's much more, but the story of my relationship with him (as I saw it and how it continues to impact me) would take an entire memoir to explore. This is not unique among daughters, but I must work out of my own experience, gleaning what is helpful and leaving the rest. Here's one piece.

After our father's death in 2002, my oldest brother began the process of gathering dad's poems for publication. Due to a series of unfortunate events, it became increasingly clear that it would not be possible to publish these in a traditional book format, so I agreed to post them online in blog format where they would be accessible and searchable by keywords to anyone from anywhere at no cost.

I started transcribing and posting them in 2014 but soon set the project aside. Out of sight, out of mind. Recently, I'd been praying about how to meaningfully and productively focus my time, now that both my husband and I are retired and home "full time." One day my nephew, Ted, contacted me about a particular song my father wrote, and asked whether the publishing project was finished. That was the motivation I needed to resurrect the project, so over the last month I have been back at it.

Why was it a struggle to do the work? This question bugged me for some time. It really doesn't take long to type out a 4-8 verse poem. It would often take longer to pick out a suitable photo to go with it and to format the text for publication. When I finally realized what the reason was, it was something I didn't expect: the toll it took on my emotions. Being a poet myself, I had to curb my desire to change dad's punctuation, style and/or word choice. I much prefer free verse over metered rhyme, which was my father's primary style. There are also a few lines which I would rather edit or delete; ones which I might not necessarily agree with, ones that reflect his opinion, or discuss the cultural norms and traditional roles of men, women and children the '50s and '60s. I have refrained from doing so, as these are his poems, not mine.

Many of these poems were songs we sang as a family during our 18 years of touring. Some are tied to particular memories, not always joyful. On occasion, a particular poem will send me back in time and I felt like a child again, receiving my father's training, instruction and/or reproof; regarding things I sometimes rebelled against (inwardly) at that time. These feelings would begin to rise again. My father was human and had eight children in tow. Sometimes it was hard for him to keep us in line. Sometimes his poems felt like sermons, like dad was trying to get me to stay in line.

The penny finally dropped. When I read and transcribed my father's poems, it felt like my father was preaching at me all over again, even after being gone for 15 years.

In reality, it wasn't that at all. He was probably about the age I am now when he wrote many of the poems. As I thought it through and prayed it over, I realized in his poems he was actually preaching at himself. He, like I, struggled with submission to God's will, with authenticity, with making life, faith and conduct align. He was immensely challenged by the trials he experienced: the loss of a son, rejection by certain friends and family members, a church split, controlling his temper, providing for his family, facing the challenges of the changing culture and yet, he also modelled his spiritual poems after the psalmist, often ending them with a declaration of trust in God's faithfulness, goodness, and sovereignty.

So today, as I transcribed another poem, I was reminded that the one true thing I know about my father is that he was resolved to do God's will, and he sincerely did what he determined in his heart (after prayer and soul-searching) seemed to be the right and most God-honoring thing to do. Did Dad always get it right? Likely not. Will I? Definitely not. He preached easy, he practiced hard. I am my father's daughter, I am much the same.

So, I'll leave you with today's poem, one that illustrates how preaching is easy but practicing is hard. The key to peace in the middle of it all? Accepting God's will. This poem can be either preaching or prayer, depending on the day.