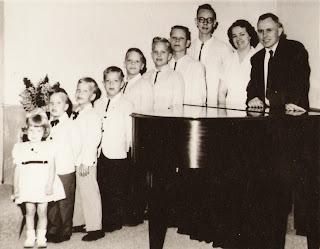 Some of you know I was born and raised in a singing family. I was the last of eight children and the only daughter of a preacher-poet father and missionary-minded stay-at-home mother. I have never known anyone who worked harder than my folks, both who were raised on farms by parents who instilled in them the very strong work-ethic of their Mennonite ancestors. Dad, as a pastor, teacher, preacher, inventor, mechanic, songwriter and poet; Mom as a nurturer, servant, laundry-tamer, canner, cinnamon bun baker, reader, letter-writing, pot-roasting aficionado. Yet while they worked tirelessly, both my parents were Contemplatives in their own right. They both spent many long hours (together and alone) reading and studying the scripture, and down on their knees in prayer, interceding for their family, friends, needs, wisdom, and for the Gospel to advance in the world.

From the time I was 18 months old until I was 19 years old, our family travelled and sang at various churches, camps, nursing homes and community events across the USA and Canada. By the time we stopped touring and Dad accepted a pastorate, we had visited 47 states and seven Canadian provinces. During that time he wrote hundreds of poems and songs of faith and comfort, and the family made seven vinyl recordings (and one cassette tape) with an average of 18 songs on each album. We also published a song book and a poem book of favorites, including a number of Dad's original works under the auspices of "Radiant Light Enterprises." We traveled under the name "The Nickel Family Singers."

To honor the desire of my oldest brother to preserve our father's legacy, I accepted the task of transcribing all our Dad's poems to make them more widely accessible. I began posting them on a blog called, "My Father's Poems." Well it grew, as these projects tend to do, and as I was seeing the end of the stack of my dad's poems, I  expanded it to include some of his songs, sermons, and now, I've begun to create videos of our family recordings, linking them to the lyrics on the blog.

As for our musical style, Dad valued four part harmony and lyrics based firmly upon scripture. His poetry style uses traditional meter and rhyme, fashioned after a century of the hymns that had become so dear to him. Though we lived smack dab in the center of gospel music country, the family sang more "hymnal" style than southern gospel. In our later ministry years, as contemporary Christian music began to explode, the younger offspring did introduce music from their generation into our programs.

With all that as background, I'm happy to share a bit of nostalgia with a video I created to go along with one of the songs we recorded, "Peace Like a River." My brothers fell in love with this song from a Blackwood Brothers' recording. It was recorded by the older boys' quartet on our third album. Enjoy!

If you like what you hear/see and want to explore more, click here: My Father's Poems. Read older posts, Search by subject and key words, or Subscribe in the right side bar to receive new poems and songs by email as they are published.
© Joyce E. Rempel on 11/08/2017 01:04:00 pm