What was Old is New Again 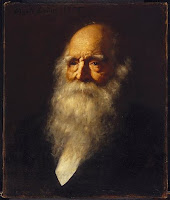 ...to meditate,
In these calm shades, thy milder majesty
And to the beautiful order of thy works
Learn to conform the order of our lives. 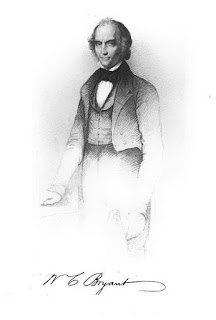 Today in 1794, William Cullen Bryant was born. He had an all-American pedigree with ancestors who were passengers on the Mayflower. He was a young critic of Thomas Jefferson, a supporter of Abraham Lincoln, and a mentor to Walt Whitman. His own career began as an attorney but he left that after a decade to pursue a literary career. He is known as a romantic poet, journalist, and long-time editor of the New York Evening Post.

In May 2012 we visited New York City and stayed near Bryant Park. My literary education was woefully inadequate, so I visited the park but did not appreciate the significance of the man it memorialized.

Since I recently acquired a 24-volume set of classic literature in the form of The Pocket University, I have begun following their schedule of selected daily readings as an introduction to the “best of” literature up until its publication in 1924. I noted yesterday that today was Bryant’s birthday and I’d be reading four selections he authored, so I began my education by the easiest path: reading his Wikipedia entry.   It speaks of his upbringing, politics, poetry, fiction, as well as his associations and accomplishments in the newspaper industry, but it also listed a few of his more famous poems and off I went, happily perusing poetry sites, reading for nearly an hour through a number of his works.

Bryant’s poems are noble, tender and graceful, “pervaded by a contemplative melancholy, and a love of solitude and the silence of the woods.”(1)  He wrote more about nature than any other poet, and his focus on nature as a metaphor for truth established a central pattern in the American literary tradition. (2)

Yet Bryant also left quite a legacy in other areas.


“Bryant, for most of his lifetime, was thoroughly a New Yorker — and a very dedicated one at that. He was a major force behind the idea that became Central Park, as well as a leading proponent of creating the Metropolitan Museum of Art. He was one of a group of founders of New York Medical College. He had close affinities with the Hudson River School of art and was an intimate friend of Thomas Cole. He defended immigrants and, at some financial risk to himself, championed the rights of workers to form labor unions.” (2)

As a young 13 year old, he wrote “The Embargo” (1808), in which he demanded the resignation of President Jefferson. However, according to britannica.com, “Bryant will be remembered longest as the poet of his native Berkshire hills and streams in such poems as Thanatopsis and To a Waterfowl.”

I continued my education today by delving into four of his poems, the selected daily reading from The Pocket University, which is now completely responsible for this lengthy blog post, and likely to cause many others. These particular poems are categorized within a larger section of “little masterpieces of poetry.”

The Mosquito, a humorous poem that almost makes me appreciate, or at the very least, identify with the critter, something I certainly would never have desired nor expected. Good writing does bring unexpected empathy. 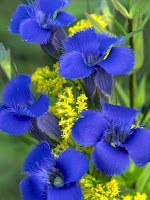 To the Fringed Gentian, is a floral description akin to a love letter. It simply entrances, and compelled me to research the flower itself (picture left).

The Song of Marion’s Men, is a tribute from the perspective of the band of troopers to General Francis Marion, “Swamp Fox,” who led them to several victories over the British and emerged as one of the most popular heroes of the revolution.

A Forest Hymn, my favorite. The woods become a cathedral. You must experience this, as my words cannot begin to do justice. I will defer to the description of Richard Henry Stoddard: "The gravity, the dignity, the solemnity of natural devotion, were never before stated so accurately and with such significance. We stand in thought in the heart of a great forest, under its broad roof of boughs, awed by the sacred influences of the place. A gloom which is not painful settles upon us; we are surrounded by mystery and unseen energy. The shadows are full of worshippers and beautiful things that live in their misty twilights." (3)

Click on its title to read A Forest Hymn, then come back and view the following video response to the poem.

Breathe, rest, and be refreshed.