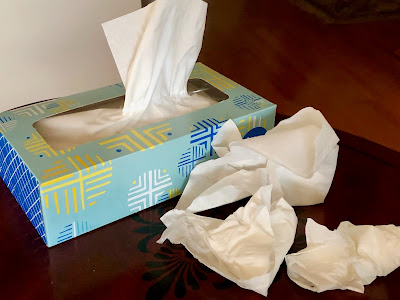 There's a large pile of tissues on the side table. Either my cold from last weekend returned or perhaps it's allergies. Henry reaches for the pile and I slap his hand away and grab them myself, explaining, "Gross germs." (He will often kindly collect my dishes and trash when he takes his own to the kitchen, despite my protest.) He smirks, utters an unintelligible phrase in plattdeutsch, then translates: "Snotty nose."

When he quotes low German phrases from his upbringing, he usually interprets, but much of the meaning is lost in translation because the nuance and social references of colloquial terms don't readily transfer. Like trying to explain a joke when someone doesn't get it. It's just not the same.

When hearing a sneeze, we usually say "Gesundheit!" ("health to you"). Henry's mother would too, for the first two sneezes, but if there were a third, she'd respond with "Krankheit!" (meaning: illness, or "you are ill").

When we began dating, Henry would use some of his favorite family phrases, especially when we visited his siblings. I found it quite endearing, as it bespoke a tenderness of memory and history, but it also triggered a familial recollection of my father speaking similar phrases with our Mennonite relatives. We didn't regularly speak plattdeutsch at home as Henry did, but it still "felt like home" when I heard it from Henry.

It is a sweet convergence of past lives where love and laughter encircles and entwines our hearts with our ancestors. It also began knitting our two hearts together, more than I knew, until now. When I can feel a surge of love linked to dirty kleenex, I know I've found the real thing, and it tickles my nose, down to my toes. (Gesundheit!)