Ringtones and Doorbells and Dingdongs, Oh MY!

For 15 year olds, life is all about the bells and whistles. Ringtones, game accessories, the right skis, the cool clothes. It's a mystery what makes one pair of jeans acceptable and the (seemingly identical) pair beside it unacceptable.

I took my son and his friend to Red Deer to water ramp. This alone is valid evidence that I have lost my mind. At least it would be if I were a mother who made decisions based on safety considerations. I blithely accepted the risks when I allowed him to join the freestyle ski club. Innocence is bliss.

“Water ramp” sounds simple, innocuous. But no, it looks like a ski jump on steroids, with a lip that throws the skier high into the air, where they are somehow able to organize their limbs into complex spins and somersaults before they smack the water with their skis. It simulates aerials for freestyle skiing. One must "qualify" a particular trick on water in front of a certified coach before he or she can attempt to qualify on snow. 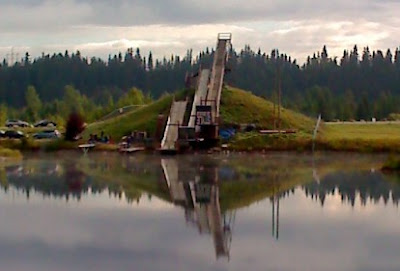 Last weekend was my son’s first venture at this and thankfully his friend’s mother takes it upon herself to educate me about the requirements.

It sounded a bit ominous, so I asked "Just in case, can you run through the list with me?"
"Sure," I'm sure I hear a bit of sympathy in her tone, "He'll need his skis, of course. Safety straps to hold them to his boots when he hits the water. Helmet, drysuit, warm underlayering, and a life jacket or PFD.” My mind begins to reel as I scramble for a pen.

“Oh,” she continues, “and he’ll need to bring money to pay the Red Deer club for the use of their ramp.”

I’m shocked. “Didn’t I pay for a season pass to water ramp?”

“Oh, yes,” she confirms, “but that was for Canada Olympic Park, not Red Deer. Each ski club has its own ramp with its own fees. Your pass is for COP only. Though our club may credit your back these fees since our ramp is out of service.”

Side note: The reason the ramp is out of service is because a parent who wasn’t willing to accept the risks of freestyle called the Health Region to express concerns about water quality in the man-made landing pond. The Heath Region promptly shut down the pond until a filter could be installed, but then didn’t have an inspector available to classify the pond so that the club could acquire the appropriate filter. In the meantime, all the skiers suffer with no ramp to practice. It was closed all of August and, so far, all of September. It might open September 17.
So I got off the phone at 10:45 pm and we began to look for the PFDs buried in the garage, the helmet buried somewhere and the new drysuit which I had rush-shipped up from Washington State for the wee shipping fee of $97.84 on UPS. We all got to bed around 2 am, after a rousing voice raising discussion as to who should know where everything was stored.
That was last weekend. I drove him up and came home to work on my publishing deadline (all night). He spent the night with his friend's grandparents and his friend's family brought him home.
This Sunday, we drive 300 km round trip to Red Deer, throw him into the pack of other club skiers (Red Deer, Jasper) and they all spent some fabulous sunny days sliding, spinning, flipping and splashing. He qualified on front flips. See facebook later this week for the video. I got some time to visit with other ski parents, take video, soak up the sun and duck down to Olds for a baby dedication.
All in all it was a pretty fun weekend, and he only lost one ski. In the bottom of the pond. He lost it last week and found it again. This week it was the other ski. Lost forever in the murky depths. Unless I drive up and dive for it myself now that the water isn't being stirred up by skiers... (wait, reality check... I haven't lost my mind that badly).
So my son is joining me on this "losing my mind" venture. Either that or the smack into the pond rattled more than just his ski bindings.

Last night as we were having supper, I wanted to have music playing. I took my Ipod to the Bose speaker to dock it and just as the music began to blare, the doorbell rang. My son, who apparently hadn't noticed my prior movements, exclaimed: "Did the doorbell just trigger the music?"

Now back to my own journey over the edge of reason….

As I drove back from Red Deer yesterday, music started playing. Rather loudly. (What IS it with our family and music?)

I looked at the radio. It was off. I looked at my son. He was sleeping, Ipod earbuds in ear. I tried not to drive off the road. Where is the music coming from? I couldn’t imagine. Was someone going by and broadcasting by FM transmitter into my vehicle? Impossible. The radio was off.

My son woke as my anxiety level increased. “Where IS that music coming from?” I was nearly screeching by now.

“Mom,” his voice was a little annoyed. “It’s your ring tone.”

I had changed the ring tone for incoming calls from our home number. I didn’t remember what it sounded like. My poor husband, on the other end of the unanswered call, is wondering why I don’t pick up. My son looks at me wondering if I’ve totally lost it. I wonder if he’s right and come here to record the epic saga.

Stop it. I can hear you from here.