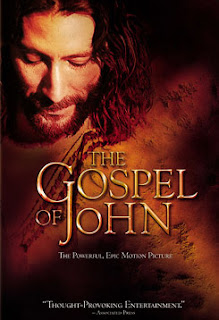 Studying the book of John, our Life Group views theatrical footage of passage and verse for the week. This week we are challenged to understand the physical as a metaphor for the spiritual: flesh and blood, water and bread (John 6). We are shaken, imagining the same words uttered in our midst, in our day. After all, Jesus Christ IS the same—yesterday, today, forever (Heb. 13:8).

Some of his would-be groupies follow only because He gives them bread. They grumble. "This teaching is too hard. Who can listen to it?" (John 6:60) and they leave.

It must have been a great exodus. All of those who want what God gives, but don’t really want Him. Like now, when "followers" turn their back on God allegedly because He "doesn't answer prayer."

After the fickle ones have cleared out, Jesus turns to His twelve, knowing the answer before he asks the question: "And you—would you also like to leave?" (John 6:67).

Then the most poignant moment, Peter—with deepest conviction—testifies to the crux of the matter: "Lord, to whom would we go? You have the words that give eternal life. And now we believe and know that you are the Holy One who has come from God." (v. 68-69)

Believe and then you will see. Jesus told this separately to both Martha and Mary before he brought Lazarus back from the dead. (John 4) Believe. Believe. Believe. Repeated 98 times in the Gospel of John. Believe, then know. This is faith. Not a blind leap in the dark, but a step into knowing. A choice.

Now the key phrase which, when uttered in the theatrical depiction, pierced my heart for the first time in brilliant epiphany:

Jesus replied, almost as if he is reminding himself outloud the reason the disciples won’t leave: "I chose the twelve of you, didn't I? (v. 70)

No frivolous following for fun, entertainment and fancy sleight of hand. No tagging along to see what He will do next. No novelty, no easy street.

My choice is to believe. To grasp Him. To believe Him. To trust Him. Not for His gifts. Not for His miracles.