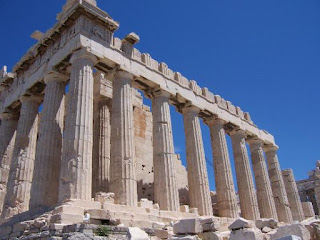 The following quote is often attributed to Alexander Fraser Tytler, who lived at the end of the eighteenth century, but extensive research here shows it more likely originated with Henning W. Prentis, Jr.
Regardless of the author, these statements resonate so clearly with readers that many versions of the quote have persisted throughout the last half century. Here is one version that currently circulates:

The average age of the world's greatest civilizations has been 200 years. These nations have progressed through the following sequence:

In a speech entitled "Industrial Management in a Republic," delivered in the grand ballroom of the Waldorf Astoria at New York during the 250th meeting of the National Conference Board on March 18, 1943, Prentis had this to say:

Paradoxically enough, the release of initiative and enterprise made possible by popular self-government ultimately generates disintegrating forces from within. Again and again after freedom has brought opportunity and some degree of plenty, the competent become selfish, luxury-loving and complacent, the incompetent and the unfortunate grow envious and covetous, and all three groups turn aside from the hard road of freedom to worship the Golden Calf of economic security. The historical cycle seems to be: From bondage to spiritual faith; from spiritual faith to courage; from courage to liberty; from liberty to abundance; from abundance to selfishness; from selfishness to apathy; from apathy to dependency; and from dependency back to bondage once more.

At the stage between apathy and dependency, men always turn in fear to economic and political panaceas. New conditions, it is claimed, require new remedies. Under such circumstances, the competent citizen is certainly not a fool if he insists upon using the compass of history when forced to sail uncharted seas. Usually so-called new remedies are not new at all. Compulsory planned economy, for example, was tried by the Chinese some three milleniums ago, and by the Romans in the early centuries of the Christian era. It was applied in Germany, Italy and Russia long before the present war broke out. Yet it is being seriously advocated today as a solution of our economic problems in the United States. Its proponents confidently assert that government can successfully plan and control all major business activity in the nation, and still not interfere with our political freedom and our hard-won civil and religious liberties. The lessons of history all point in exactly the reverse direction. - Henning W. Prentis, Industrial Management in a Republic, p. 22

Does this resonate with you? Do you see this pattern in your knowledge of history of empires that have fallen? Where do you think your country sits in this fatal sequence?
© Joyce E. Rempel on 7/14/2009 02:02:00 am