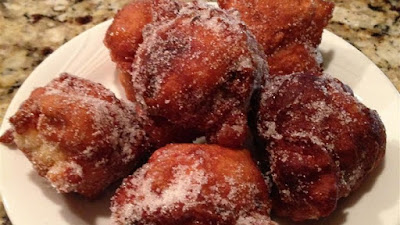 This was my mother's tradition. Here's a link to a similar recipe from Mennonite Girls Can Cook. I like this version, and the four pictures on the page show you the stages and the various ways the Portzelky can look. The name is from Low German origins, but Mom only ever called them "New Year's Cookies." It's basically a homemade donut taste or a deep fried raisin fritter. To. Die. For.

Every New Year's eve, if we were not on the road singing, my momma would make these, then once they'd cooled a bit, she'd gently shake them in a bag to coat them with one part each of granulated sugar and icing sugar. Once in a while, she would make a glaze for them, like a donut glaze, but usually she'd shake to coat them so the family could partake of them one batch at a time - we weren't that good at waiting for the entire pan to be full. She would make so many that she'd use her big blue and white speckled enamelware turkey roaster to store them in, usually lined with wax paper or paper towel to absorb some of the oil. 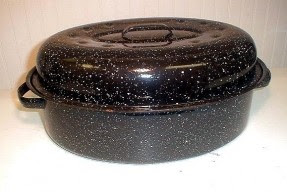 Mom preferred to use Crisco Shortening, as less was absorbed by the dough as it cooked and she could filter it afterwards and re-use it. She would melt and heat the Crisco over the gas burner in her large stock pan and fry about a dozen at a time, turning them halfway through. Getting the heat setting just right was critical. Too high and the outside would be too dark while the inside remained gooey. Not hot enough, and you'd end up with the fritters absorbing too much grease. Mom usually had the right touch for the temperature!

I don't make these. I've never attempted. Now that I limit my consumption of wheat, I wouldn't likely even eat them, should I attempt to make them. However, since they were such a sweet, delicious memory from my childhood, I still think of them every single New Year's Eve without fail, and of my mother with great fondness.