A Psalm of Asaph, Chief Musician 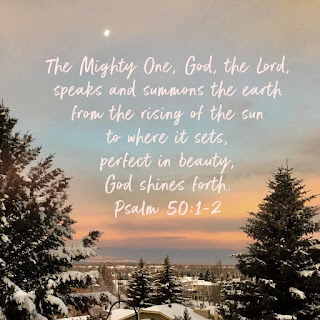 King David appointed some of the Levites as musicians and ministers before the Lord. Asaph was the chief minister. Together with his brothers, they were to continually serve before the Ark of the Covenant to invoke, to thank, and to praise the Lord, the God of Israel. Asaph was a priest, musician, and poet; while others played the harp, lyre, and trumpet, his particular role was to sound the cymbals. (I Chronicles 16)

This beautiful song of Thanksgiving was appointed by David to be sung by Asaph and his brothers. It is a beautiful declaration we can sing before the Lord, to "ascribe the glory due his name" and keep our hope fixed on the one who is Lord of all:

David’s Song of Thanks

8 Oh give thanks to the Lord; call upon his name;

make known his deeds among the peoples!

9 Sing to him, sing praises to him;

tell of all his wondrous works!

let the hearts of those who seek the Lord rejoice!

11 Seek the Lord and his strength;

12    Remember the wondrous works that he has done,

his miracles and the judgments he uttered,

13 O offspring of Israel his servant,

children of Jacob, his chosen ones!

his judgments are in all the earth.

the word that he commanded, for a thousand generations,

16 the covenant that he made with Abraham,

his sworn promise to Isaac,

17 which he confirmed to Jacob as a statute,

to Israel as an everlasting covenant,

18 saying, “To you I will give the land of Canaan,

as your portion for an inheritance.”

19 When you were few in number,

20 wandering from nation to nation,

from one kingdom to another people,

21 he allowed no one to oppress them;

22 saying, “Touch not my anointed ones,

do my prophets no harm!”

Tell of his salvation from day to day.

24 Declare his glory among the nations,

his marvelous works among all the peoples!

25 For great is the Lord, and greatly to be praised,

and he is to be feared above all gods.

26 For all the gods of the peoples are worthless idols,

but the Lord made the heavens.

27 Splendor and majesty are before him;

strength and joy are in his place.

28 Ascribe to the Lord, O families of the peoples,

ascribe to the Lord glory and strength!

29 Ascribe to the Lord the glory due his name;

bring an offering and come before him!

Worship the Lord in the splendor of holiness;

30 tremble before him, all the earth;

yes, the world is established; it shall never be moved.

31 Let the heavens be glad, and let the earth rejoice,

and let them say among the nations, “The Lord reigns!”

let the field exult, and everything in it!

33 Then shall the trees of the forest sing for joy

before the Lord, for he comes to judge the earth.

for his steadfast love endures forever!

“Save us, O God of our salvation,

and gather and deliver us from among the nations,

that we may give thanks to your holy name

and glory in your praise.

36 Blessed be the Lord, the God of Israel,