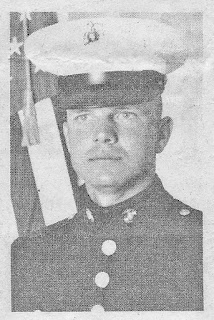 Remembrance Day
is splattered with memories,
festooned with pride,
saluted with respect
and soaked with tears.

On this Remembrance Day, I honor the memory of my brother Jack, who served in the Marines. 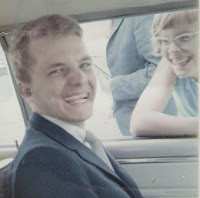 Jack was my favorite brother, primarily because he gave me time and attention. This was hard to come by in a house full of people, mostly boys. As the youngest child and only girl, I was often left out of activities, or at least it seemed that way.

Jack would tell me stories, fascinating stories he seemed to make up out of thin air. Stories I remember to this day, of children exploring old houses and caves, getting lost and rescued, with much tension, drama, and fun in between.

But all was not sunshine.

As the youngest child I was often privy to conversations I probably shouldn't have heard. There came a day, after Jack had been married several years, when there was a final falling-out between Dad and Jack.

In the coming year, Jack joined the Marines and went to basic training, winning every award or challenge available. He was determined to succeed as one of "the few, the proud".

He was appointed to officer training school and had a one-week leave before he had to report. He went home to his wife in Oklahoma, bought new tires for the car and took it for a test drive. He didn't make it home.

It was a Saturday morning when we got the news. Stunned disbelief. He'd lost control of the car, it left the road and hit a tree, killing him instantly. The funeral was held on his 26th birthday. My father wept beside the casket with his head on Jack's chest; two military men folded the flag and presented it to Jack's widow, and this was the first time I saw her break down.

Afterward, our family gathered in the funeral limousine only to have Dad climb back out to visit with people who had come to pay their respects. Back at the house, I spent time alone with Jack's widow, Karen, as she went through her keepsakes of Jack and shared some of the facts about his short lived military career: how it shaped him and why he chose to serve.

Remembrance Day is splattered with memories, festooned with pride, saluted with respect and soaked with tears. The other days we are left to pick through fields of grief, sort emotional baggage, gather treasured remnants and flowers. All I have gathered of my favorite brother is a fading newspaper photo and a heart full of mixed up memories.