A Dutch Lullaby by a Missouri Boy 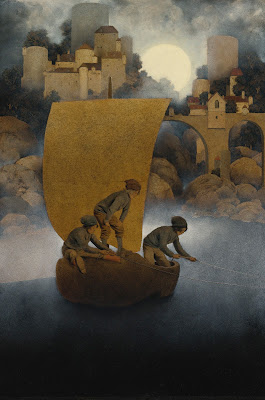 I think I would have liked Eugene Field. We were both from Missouri (but born more than 100 years apart). His distinguished father was part of the counsel who represented Dred Scott in the famous lawsuit which indirectly helped spark the American Civil War.

Eugene, however, was known more as a prankster and partier before he settled down as a newspaper columnist and writer of beloved children's poems, including Little Boy Blue (not to be confused with the nursery rhyme) and Wynken, Blynken and Nod (originally titled "Dutch Lullaby"). A short biography of Eugene Field is here.

Many versions of the Dutch Lullaby were set to music by artists of the sixties and seventies. The following Silly Symphonies cartoon was released by Walt Disney Productions in 1938, It stylized the fishermen of the poem as three pyjama-clad children playing among the stars.

And here is a shorter, sweet version of the poem set to music by Donovan, recorded as the 14th track off the 1971 album "HMS Donovan."

Another musical setting was written by Lucy Simon, performed here with her sister Carly Simon in 1968.

Many of Field's works were accompanied by paintings from Maxfield Parrish, such as the 1902 illustration used at the top of this post. (Source: Wiki Commons)

I hope you enjoyed this little walk down memory lane, even if it is a new memory just discovered.