So You Wanna Lead Worship? 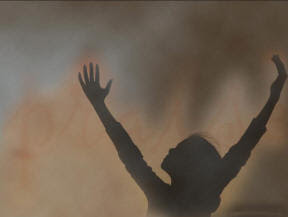 There he is, on all fours, cloth in hand, spray cleaner by his side. His face is not visible. He’s unaware of the camera. His friend confides, “Part of his process every week—in preparing for leading us in worship—is hand-scrubbing the sanctuary floor underneath each seat.”
* * * *
Her talented young adult daughter is settling into a new church in her new university town, far from home. She calls to relay the latest: “The music leader listened to me audition, then said they need someone to vacuum the children’s classrooms every Sunday morning before church as part of the worship team training.” She accepts the role eagerly and is then placed on a worship team.
* * * *
Watch him shift back and forth from the leg with the titanium knee to the other one he’s having replaced next year before he retires from his blue-collar job. See how he stretches his twice-broken back every hour or so? Wipes the sweat off his face regularly during the 12 hours a day he leans over that hot camp stove, chopping board or steaming dishwater in the camp kitchen? Watch him give a full week of his “vacation” every year to do this so 130 campers can hear about Jesus.
* * * *
She’s often late to choir rehearsals, English isn’t her first language, she struggles to find and keep the proper pitch. But she prays with fire and enters in to the time of music with abandon, shouting at the end of the songs like she’s in the bleachers at a game and the home team just scored.
* * * *
He's a prolific songwriter, preparing to record an album of worship songs. He doesn't stand on a platform, in the spotlights, doesn't sell tickets to the theatre seating. He seats his band in the congregation. On the floor, everyone together, sings and worships the Audience of One.
* * * *
They shuffle in for drama auditions, fill out a slip with name and contact info. Then there’s that question: “Would you accept a smaller role in order to allow more people to participate?”

She swallows hard. “If I say no”, she muses, “I might not get any role. But I really want that one role. It would be my heart’s desire to play that role.” She is offered a smaller role and she wrestles hard, then accepts it as a gift. “God works in all things for the good of those who love him.”
* * * *
They’re arguing like brothers, the whole lot of them. They jostle and joke, poke fun at each other’s foibles as they walk down the dusty path. How much further is it?!  As always, on a road trip, debates rise about who’s strongest, fastest, best at healing the sick, greatest in faith.

After they were settled at the end of the journey, Jesus turns and asks, “What were you arguing about?”

Awkward silence. Nothing but crickets.

Then he looks each one of his closest comrades in the eyes as he speaks. Not a one can hold his gaze before dropping their head as they hear: “Anyone who wants to be first must be the very last, and the servant of all.” (Mark 9:33-35)
* * * *
Earlier in the week before the disciples argued, Jesus taught the entire crowd, including these rowdy disciples, some of the principles of the kingdom:

“Anyone who intends to come with me has to let me lead. You’re not in the driver’s seat; I am. Don’t run from suffering; embrace it. Follow me and I’ll show you how. Self-help is no help at all. Self-sacrifice is the way, my way, to saving yourself, your true self. What good would it do to get everything you want and lose you, the real you? What could you ever trade your soul for?”  (Mark 8:34-37)

In Matthew 20:20-28 we see the mother of James and John asking they be given a special place in the coming kingdom. They didn’t know the cost – his coming suffering and death. They were seeking a costless glory and causing dissension among the other disciples.

There is a danger for those of us in the organized church to pursue "spiritual success", driven by the pride of life and a natural desire for the applause of people. I must lose myself in God for himself alone. Nothing else. No one else. Only then will his work be accomplished for his glory and not mine. I cannot judge my own humility. I must keep my eyes fixed on Jesus. When I am most humble, most sincerely worshiping, most unselfishly serving, I will not be aware of it, for my eyes will be focused on him. It is out of a love relationship that humility, worship and service spring. For God and God alone.