I want to remember these moments, Part 2
(read Part 1 here)

Andrew and Rebecca's pre-wedding week was a rush, literally. We forced ourselves to drive the speed limit while running errands. There’s no point, really, ever, to exceeding the speed limit. I’m learning in my later years to accept the reality that if I am “behind schedule”, going faster is only going to cause more problems, so I exhale, relax and face the consequences. Usually, it’s a false sense of urgency that drives me to think I have to rush, but as my momma always said, “Haste makes waste” and as my daddy liked to quote: “The hurrier I go, the behinder I get”. I'm not sure what that even means, except I know when I rush, I inevitably forget something or drop something and make a mess or get a speeding ticket or (God forbid) even get into a collision.

We arrived in Langley on Monday before the big day Friday. We had already been on the road for a week, sightseeing, visiting museums and wineries and spending some slow, savory time together on vacation, getting ourselves mentally geared up for the rush of wedding week with all its bustle and people. We took a room at the Ramada for two nights, until our VRBO reservation was ready, which we would share with my brothers beginning on Wednesday when they arrived.

Every morning, Tuesday, Wednesday and Thursday, we headed over to Porter’s for breakfast. This is the café so capably run by Rebecca's parents. The first day, Tuesday, we met up with my son (the groom), his bride, her mother and several Danish and Dutch relatives who had arrived in town for the wedding and wanted a chance to get acquainted. Such delightful folks. It reminded me again about the beautiful scripture God gave me when I was widowed, which found it’s fulfillment, first in my marriage to Henry and now in Andrew’s marriage to Rebecca - how God “sets the lonely in families” (Psalm 68:6). I still am moved by the sensations of love and laughter and warmth of family that surrounded us that day and the days following.

I spent Tuesday with the groom, running errands while Rebecca was working. While Henry bonded with the bride’s father running various errands, I went with Andrew to look for socks and a tie, and then dropped his vehicle off at the Honda dealership to have the air conditioning serviced. It had broken down during their trip back to BC from Calgary in July. Since the long range forecast for the Langley area included +38C temperatures for the coming week, I couldn’t imagine not having A/C.

We made a stop at Staples to duplicate some photos and look for a special folder in which the wedding license could be placed for safekeeping. To our pleasant surprise, we ran into Aunt Elsje at Staples, collecting the wedding ceremony programs she had designed. 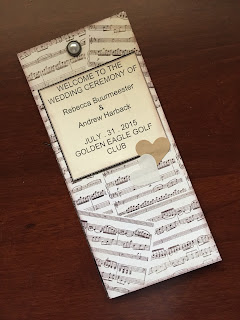 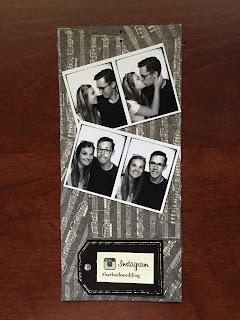 These then fan out to reveal three pages inside (wedding party, order of ceremony and lyrics for the hymn), all anchored by a decorative fastener. 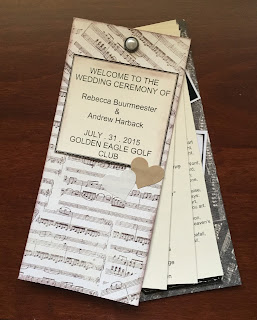 Much love and labor went into this souvenir. 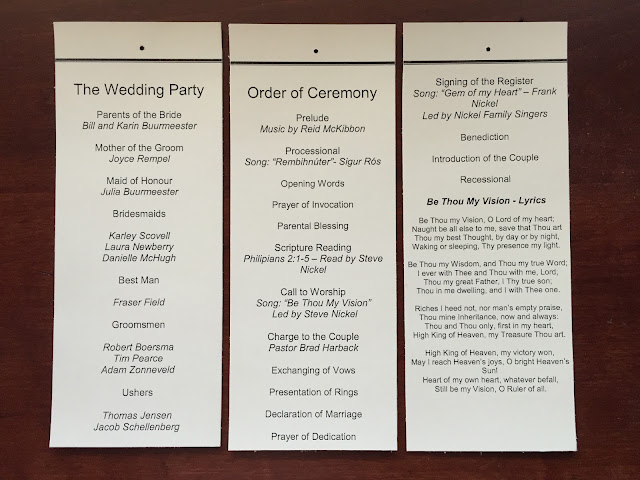 We had a quiet evening taking a dip in the pool and a soak in the hot tub at the hotel before heading for bed. The next morning we packed up and checked out and met Andrew and his roommate, my soul-son, Fraser, for breakfast at Porters.

This day, Wednesday, found Henry bonding with Bill by visiting Bill’s barber and both having their heads shaved. Bill always keeps this look, and it wasn’t the first time Henry had done this and I really like the look. He says he’ll let his hair grow for “warmth and traction” in the winter but I think the “Mr. Clean” look is definitely hip. The rest of the day included more errands and checking into our lovely VRBO home in Surrey, about halfway between the bride’s home in Langley and the wedding venue in Pitt Meadows. It had four bedrooms and two baths and a kitchen fully stocked with everything but food.  We purchased some groceries and coffee for breakfasts for the six of us who would be staying there.

In the late afternoon I had been invited to join the mani-pedi excursion with the bridesmaids, bride and her mother. To be included in this event was such an honor and it was great fun to hear the girls chatting and preparing for the big day.  When my brother Jim and sister in law Sheilia arrived later from Colorado, they went out for supper with Henry and then relaxed at the rental house until I returned. Steve and Wanda arrived from North Carolina after midnight, which was nearly 2 a.m. by their normal Eastern Time Zone, but Wanda and I immediately sat down to catch up – oh, the fun of “sisters” after being apart for a year. Wanda stood up for me at my wedding last August.

Thursday was pretty much all business. We had volunteered to take a jaunt to the east side of Chilliwack to pick up chair covers, and then later morning we spent picking up take-n-bake pizza, veggie trays and fruit trays from Costco and delivering them to the refrigerators at Porters in preparation for dinner for family and bridal party after the rehearsal. After that, everyone headed for the venue to decorate and rehearse.

The aunts doing décor placed one part of the centrepieces on each table, awaiting the floral part the next day. Each one was to be adorned by photos of the bride and the groom at the age that equates with the table number (i.e. table one had photos of both of them at age one, table two = age two and so on, up to age 12).

While my brothers and I were practicing our quartet in the blazing sun, Henry was climbing up and down a very tall ladder in the stifling heat of the screened room where the reception was to be, hanging strings of twinkle lights with the help of one of the Dutch cousins. It was likely around +40C up in those rafters and it took several hours, but the result was truly lovely.


Everyone pitched in to put on chair covers, these had burlap ribbons and a daisy tied around each one. I made sure the correct number of chairs was placed at each table.

After the formality of the ceremony rehearsal, we all headed to Porters for pizza and visiting. It was the bridal party and partners, along with any family members who had traveled from a distance. Some of our Harback family was there: Pastor Brad, wife Tina, kids Paige and Max; Andrew’s grandparents, Roy and Lila; his cousin Rachael and her husband and kids; as well as with Rebecca’s Dutch and Danish relatives and my dear friends, the Boersmas, from The Hague. My brothers and their wives, of course, with the addition of my brother, John, his wife Kathryn and one son joined us there – we’d visited them in March at their home in Phoenix and I was delighted they could join us for this special time. 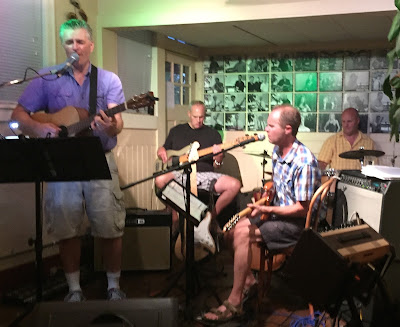 We all ate, laughed, listened to live music by one of Bill’s bands and shared some special time of getting acquainted or re-acquainted. Everyone was hungry so the pizzas we’d brought disappeared faster than anticipated and once again, Bill saved the day with a few handmade flatbread pizzas for the latecomers. He and Karin are such incredible hosts. I am in grateful awe.

Back to the VRBO rental home for the evening, we visited a while and then all went to bed. Such a unique and rare privilege, to sleep under the same roof with several family members for the first time in a very long time.

A special interlude that remains one of my favorite memories is when we arrived at the Costco parking lot. We were still sipping our McDonald’s coffee from Chilliwack and Henry parked in the shade and kept the car running so the A/C would keep us cool. He said something to the effect of, “Let’s just take some time to catch up. We’ve been around a lot of people for a lot of time and I’d like to have some time for just you and me.” So we exhaled and stretched and relaxed into some easy conversation. This was a refreshing oasis in the middle of the activity. It was such a wise choice and I am so grateful for Henry leaning into ways we can connect. This was only one among many ways I’ve witnessed in the past year where he is very intentional about our relationship. Even in the middle of a long to-do list or in the middle of a crowd, he lets me know he sees me and appreciates me, reaches out with a quiet word, squeeze, or wink – our own private love-link in the middle of being alive. In every aspect of my son’s wedding prep, he’s been available and helpful in jumping in to do whatever is necessary or release me to do what I needed to do but he also knew we needed to just be still and enjoy each other for a few precious minutes.

This whole week has been about connecting family, sharing love and memories and making new friendships. We’re united in one purpose and it is this sense that I want to re-remember whenever I recall the wedding. It is about the people, the family, the friends who have made our lives rich, who have built into us and encouraged us and held us when we cried and poked us when we got too full of ourselves and above all, loved on Andrew and Rebecca and helped make them the amazing people they are today. 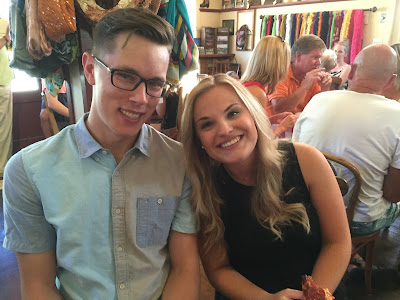